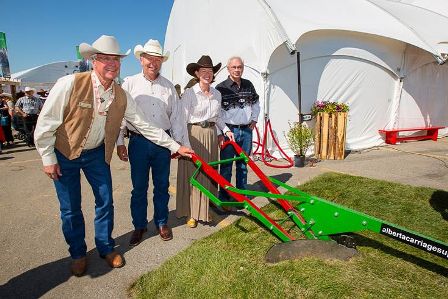 “The Calgary Stampede is an iconic Canadian institution, and our government is delighted to help celebrate its centenary through our contribution to the new Agrium Western Event Centre,” said the Honourable Ted Menzies, Minister of State (Finance) and MP for Macleod, on behalf of the Honourable Denis Lebel, Minister of Transport, Infrastructure and Communities.  “This new Centre will help promote Western Canadian heritage and will be an exceptional gathering place for Calgarians and visitors from around the world.”

The new agricultural arena and exhibition hall will stand on Stampede Park as one of the most unique agricultural showcases in the world; a centerpiece for agriculture education, exhibition and industry in southern Alberta; and a gathering place for both rural and urban communities.

“Recognized as one of Canada’s most popular events, the Calgary Stampede attracts millions of visitors from around the world and offers a unique taste of Alberta’s western heritage and values that represent our past, present and future,” said Premier Alison Redford.  “Our government is proud to provide funding that will help set the stage for another 100 years of Stampede success.”

“We’re thrilled to be breaking ground for the Agrium Western Event Centre during the historic Centennial year of the Calgary Stampede,” said Mike Wilson, President and Chief Executive Officer of Agrium, Inc. “This Centre will be a place to celebrate agriculture and educate our guests about the earth’s global food needs and what it takes to put nutritious food on the table here and around the world.”

“It’s always been the Calgary Stampede’s vision to create a year-round gathering place and looking ahead, the Agrium Western Event Centre will definitely provide meaningful agriculture experiences throughout the year for urban and rural audiences alike,” said Mike Casey, president and chairman of the board, Calgary Stampede. “The Calgary Stampede is thankful for the support of our funding partners including the Government of Canada, the Government of Alberta, and Agrium, a major sponsor. Private donors have also contributed, and many are Stampede volunteers.”

The Agrium Western Event Centre will be the largest facility of its kind in Canada and one of the most significant infrastructure projects in Stampede history.

The Governments of Canada and Alberta each committed up to $25 million toward the revitalization of agriculture buildings on Stampede Park, for which the total overall cost is $60 million. Most of this amount was dedicated to the construction of the new Agrium Western Event Centre, on which construction is set to begin shortly after this year’s Stampede.

Of the federal commitment under the Building Canada Fund, approximately $18 million was allocated to the Agrium Western Event Centre, for which the total cost is $42.6 million. Remaining funds were allocated toward renovations to the Agricultural building ($2.3 million), livestock access space and other associated costs.

Office of the Minister of Transport

Office of the Premier