The Agrium Western Event Centre is starting to take shape. Construction has been underway for the past six months and visitors to Stampede Park can see the exterior walls of the Exhibit Hall section of the building.

The construction site is set to transform even more leading up to Stampede as the steel structural components are scheduled to be delivered in the coming weeks.

“The cement walls visible today represent less than 10 per cent of all of the exterior walls that will be constructed before Stampede 2013,” says Jim Bellingham, the Capital Projects and Construction manager. “An early winter meant earlier ground frost so you will see the paving of sidewalks and the plaza start in a few months and in spring we will install landscaping around the area.”

The two additional construction projects — the new Infield access tunnel and the shortening of the race track are well on the way.

The crew made an unexpected discovery when they started work on shortening the race track. While digging, they were surprised to find foundations of the City of Calgary’s retired power generation building.

Construction of the two-lane tunnel is 80 per cent complete and the track 85 per cent finished. They will be ready on time to welcome the thundering chuckwagons this July.

The largest project in our history, the Agrium Western Event Centre is an essential part of the Stampede vision of a year-round gathering place for agriculture, commerce, education and entertainment. Bridging urban and rural culture, the complex triples the agricultural space on the Park.

The Government of Canada and Government of Alberta each committed $25 million toward the construction of the Agrium Western Event Centre and the revitalization of agriculture buildings at Stampede Park. 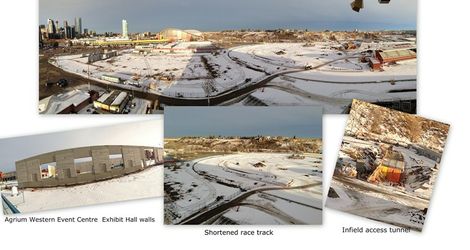