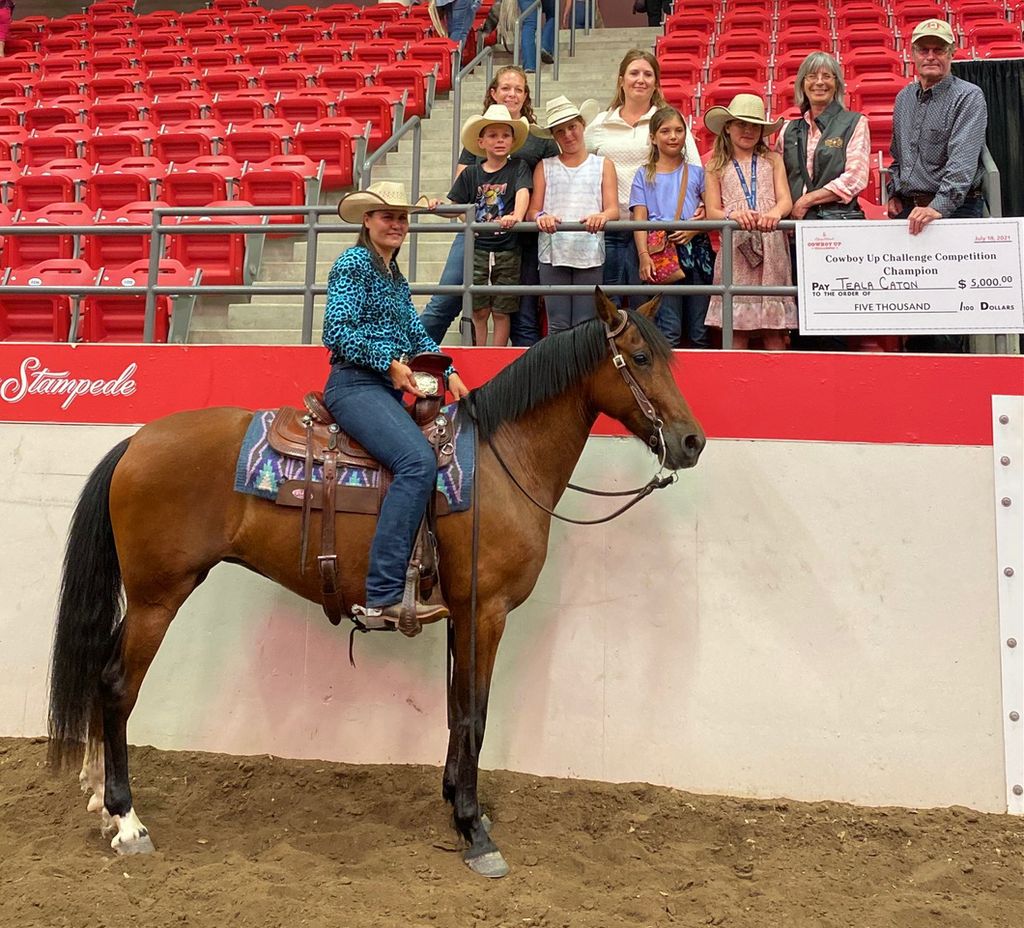 Calgary – Six women and two men competed in a heart-pumping race to the finish in the 2021 Calgary Stampede Cowboy Up Challenge, where it came down to a close finish between two outstanding cowgirls. Ultimately, Teala Caton from Eckville AB, claimed the championship buckle and a cheque for $5,000, with Calgary’s Ariana Gray being awarded Reserve Champion.

Caton’s entire family was at the Nutrien Western Event Centre and cheered her onto victory, including young daughter Aliya Caton.

The Calgary Stampede Cowboy Up Challenge is a multi-faceted equestrian sporting event that showcases both horse and rider as they maneuver through a series of obstacles. Each obstacle demonstrates their amazing horsemanship skills, a horse’s agility, and their incredible speed.

Cowboy Up organizer and Stampede volunteer Pete Fraser travels the world to research and develop the obstacles for the event.

“This is a sport that is on a lot of cowboy’s bucket list. It’s a fan favourite because all you gotta do is watch it once, and you’re an instant expert. Cheering helps the horses to do what might seem the impossible,” says Fraser.

The event is an invitational competition, limited to eight top-notch riders, and is the most well attended Extreme Cowboy Race in the World. Women dominated the competitor list which included Melissa Glowinski who rode her mule Jessica Rabbit (only the second mule to ever compete) and Sophie Lowe, the youngest competitor to ever to be invited to compete in the Cowboy Up Challenge.

“It’s has been my dream for a long time to be able to just meet the other riders – especially Ariana,” said Lowe. “I’m so excited to be here at the Greatest Outdoor Show on Earth.”

Ariana Gray, a graduate from the Calgary Stampede’s Showrider program, first competed in the Cowboy Up Challenge in 2019 at the age of 17 and won Reserve Champion.

“I had a great time out there. The bear obstacle was so funny, it was so creative having to save the little children.” said Gray.

The Cowboy Up Challenge consists of three rounds, with the final round capping off the event on Sunday. The first round took place on Friday with first time competitor Shannon Luyendyk taking first place. Teala Caton then took the rest of the competition placing first in round two on Saturday and winning the championship on Sunday.

Caton beams when talking about her horse. “Salty is a nine-year-old mare.  She’s really sweet and she tries really hard. She’s a thinker, so lots of hours in mental preparation. She loves being here and she really wants to please.”

For full results from the Cowboy Up Challenge, please visit ag.calgarystampede.com/results.