Calgary - There were lots of family connections among those advancing from Wildcard Saturday to Showdown Sunday at the Calgary Stampede.

In the saddle bronc riding, brothers Heath and Cody DeMoss rose to the top of the heap. Cody was 87 points on Calgary’s Simply Marvellous, to pick up an extra $6000; while younger brother Heath was only two points behind at 85 for his trip on Evening Mist, for $5000. That led to a very special victory lap for the two Louisana cowboys.

“Me and Cody were both talking about it,” added Heath. “That was probably one of the more memorable victory laps I’ve ever had. To get to go around the Greatest Outdoor Show on Earth and get to look at your brother in the background… with I don’t know how many thousands of people out there, it was a very memorable trip I won’t soon forget about.”

Barrel racer Mary Walker and her horse Latte zipped around the barrels in a time of 17.94 seconds, to claim the $6000 payout, as well as at least one more run on Sunday.

It was an emotional day for Walker, as she shared with the Stampede crowd that it came on her late son Reagan’s birthday. She and her husband Byron lost their only son in a car accident in 2011.

“I flew home to Texas and yesterday put flowers on his grave, and wished him a Happy Birthday, so today’s for him,” said Walker, blinking back the tears. “I feel like he’s with me all the time and encouraging me to keep going.”

Walker’s been close to the $100,000 before, making it to Sunday at the Stampede in all four of her appearances, but has hasn’t yet claimed the big cheque. Joining her from Wildcard Saturday is Kimmie Wall of Utah, who was excited to accept a late invitation as a replacement to compete at the Stampede, and made a run in 18.37 seconds on Saturday.

It may have been sloppy in the arena, but Hunter Herrin of Oklahoma was sharp on the start, the catch and the tie, capturing the $6000 for first in tie-down roping. He snagged a Sunday appointment, and so did Timber Moore of Texas, the defending Stampede Champion, when he got the job done in eight seconds flat.

Keeping up the family theme, Timber’s cousin Clayton Moore of B.C. was fast man in the Wildcard steer wrestling round, with a 4.4 second run, to snatch a Showdown qualification, as well as $6000. Donalda’s Cody Cassidy accomplished exactly what he needed to do, when he was 4.7 seconds for second place money of $5000, but just as importantly, a chance to run again at his first $100,000 Stampede title.

A cowboy who’s been to the stage for the big stage twice in his career gets to go for a third one Sunday. Kaycee Feild of Utah rode Xceptional Margarita to 85.5 points for first and $6000. Yvan Jayne was raised in France, but he proved real cowboys can come from anywhere. He was 84 points on Raggedy Ann, and he’ll be vying for his first Calgary championship, with $5000 stuff in his jeans from Wildcard Saturday.

Bull rider Cody Teel of Texas set the bar high Saturday when he spurred out an 88 on Nailed. Brazilian Robson Palermo thought he’d have a chance to ride on Sunday when he was 85.5 on Blue Bell. But Alberta’s Zane Lambert took full advantage of a re-ride opportunity, when he was 87 on a bull called Be Bop, giving him the second spot for Showdown Sunday.

The Calgary Stampede marked Lambert’s first bulls back after an injury hiatus. In May, at nearby Stavely, he was stepped on by a bull, suffering two collapsed lungs, among other wounds. The fact he’s riding at all is a feat of determination and hard work.

“It was my goal, right from when I got hurt, to come back and compete at the Stampede. I never wanted anything more in my life, so it’s pretty cool to move on to Sunday, and have a chance at winning it. That’s what I’m here for. It took a few bulls to get the rust knocked off.”

Call it a Saskatchewan sweep in the novice riding event. Chase Zwiefel of Paradise Hills became the only novice saddle bronc rider to make the whistle on two horses. But he rode with style Saturday, chalking up 77 points on Unit Doctor for a 149 point total. The 19-year-old could hardly contain his excitement as he clutched his trophy bronze.

“It was just tons of fun. It’s an adrenaline rush that can’t be matched riding a horse that great in front of this many awesome fans,” bubbled Zweifel. “You look at the past champions of this thing, and it’s cool to think you’re following in their footsteps.”

“It’s outstanding,” stated Link, about his championship win. “I don’t even know how to describe it. It’s what I hoped to do when I came here and the chips kind of fell in my favor, I guess.” 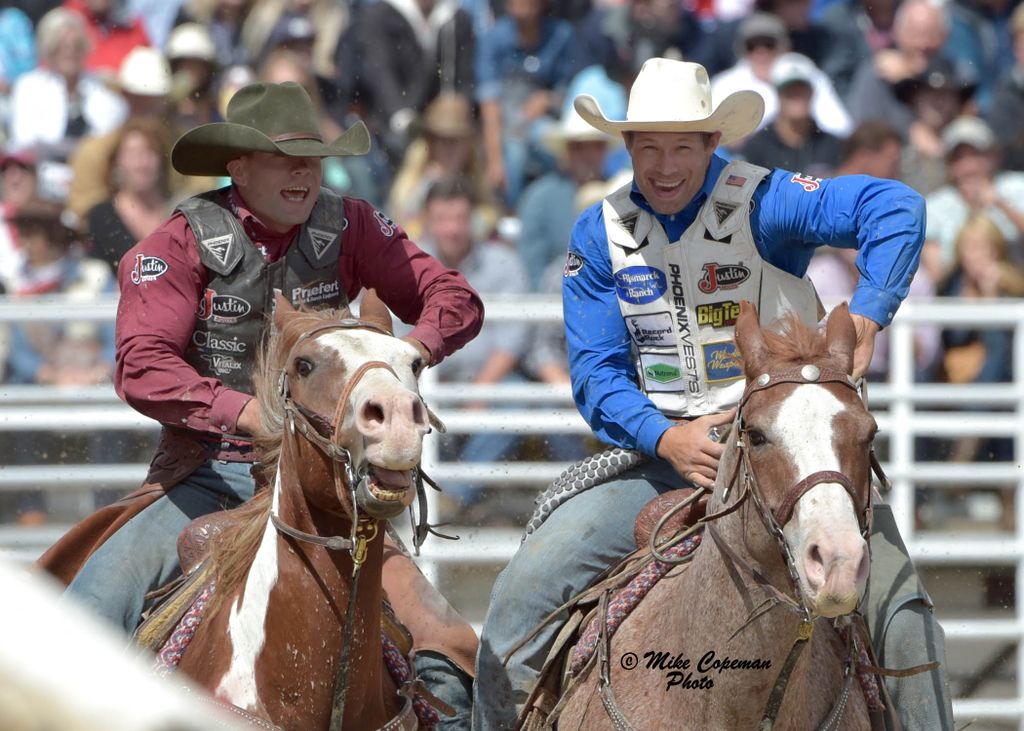