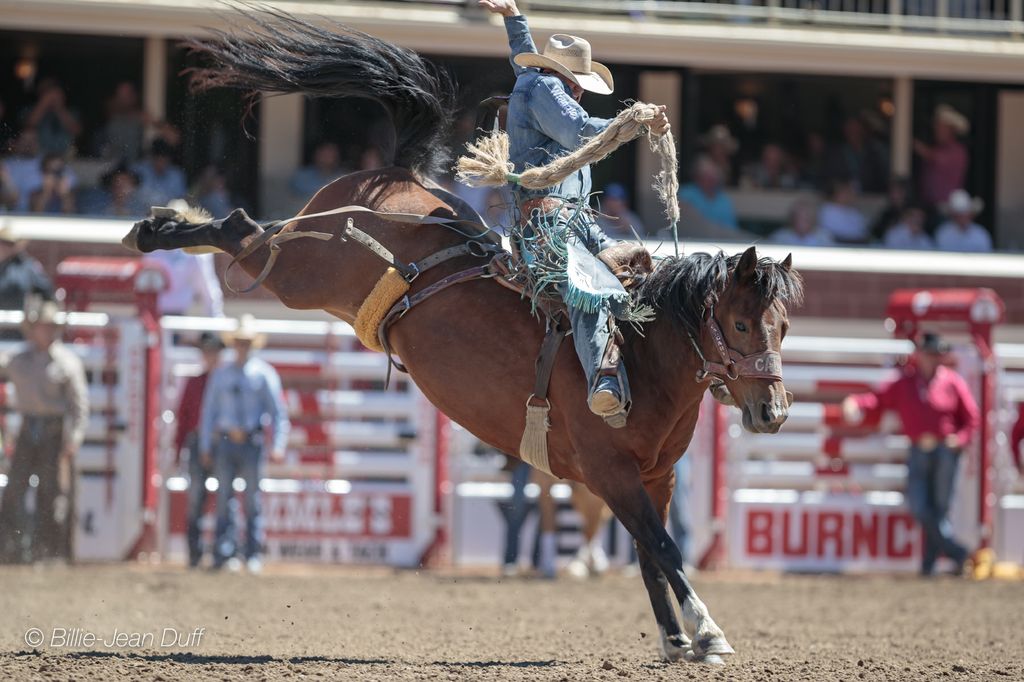 Fun in the sun and playing with pain was all part of the Day Two rodeo at the Calgary Stampede. Isaac Diaz made an impressive spur ride on Calgary Stampede horse Warped Logic to earn 87 points from the judges and the first-place payday in the saddle bronc riding. But what’s even more remarkable is that the Texas cowboy is even climbing on a bucking horse, considering he was taken from the arena on a stretcher after a ride just five days ago, when a bad chute exit crunched his shoulders down on his hips.

“Well, praise God that nothing broke,” acknowledged Diaz. “They just said I had multiple separated ribs up my spine. I never have felt anything that painful before. But I definitely had a lot of people praying for me at home, and I can dang sure feel it, because it’s been getting better every day.” The $5500 Diaz earned Saturday bumps his tally up to $8,500, but defending champion Zeke Thurston was only a point behind him in the round, marking 86 on Turkish Whiskey. He’s the leader overall for Pool A with $9000.

For the second day in a row, the winning time in the tie-down roping was 6.9 seconds. But this time it was Cade Swor who turned in the speedy run, worth $5500.

“That’s the first one I’ve ever tied in six,” said the Texan. “I was pretty excited, to be honest with you. I was really proud of my horse. He’s so much fun whenever you just go fast. I felt like I really got a great start.” The man with the fast time on the first day was in the money again Saturday. Cory Solomon, split third place in the round so he’s now the overall Pool A leader with $8500.

Chase Outlaw had a sip of Tennessee Whiskey in the second round, and it was sweet, as the Arkansas bull rider chalked up an 88.5 score to top the round.

“That’s the name of the game, is having fun,” insisted the PBR veteran. “I’ve just come off my third shoulder surgery. That’s only like my 20th bull back, and I was trying to make it a job.” “But we’re here to have fun and that’s why we do it. That’s why we started as kids, so that’s just what I had to go back to. When you have fun, it looks like that.” Outlaw earns the $5500 daily bonus for first, but Joe Frost became the only rider with two rides under his belt, placing second with an 86. He leads Pool A with $9500.

Alberta fans had more to cheer about in the steer wrestling, when Donalda’s Cody Cassidy got his steer turned over in 4.4 seconds. That time was equaled by Stampede newcomer Rowdy Parrot of Louisiana so the two got a bronze each and split the prize money, giving them a $5000 bonus each. That means Cassidy has the edge in the Pool A standings, with a $9500 tally, but he knows his lead isn’t safe with defending champion Tyler Waguespack nipping at his heels. His time was 4.5 seconds Saturday, and his third-place earnings mean he’s just $500 behind Cassidy, with $9000.

“I can’t complain. It’s off to a good start,” noted Cassidy. “I’ve got two more days left and hopefully I can draw a couple more good steers and just keep picking away. That’s all you want to do, just get a piece of the pie. This is one of the biggest rodeos we come to for the year, so you want to do good and win some money. That’s what we’re all here for, is the money.”

The fastest barrel racer of the round was Colorado cowgirl Ivy Conrado, with her time of 17.45 seconds, in her second trip to Calgary.

“I’ve never won a round here. The first year I came to Calgary I was in Mary Burger’s set and she swept it, and I won second three times, so I really wanted to get it today.” Conrado has placed in both rounds and is the Pool A leader, with $9000.