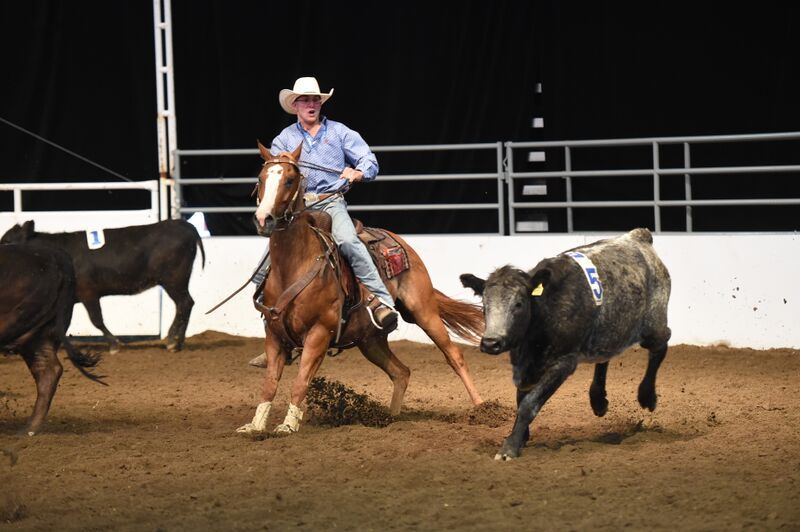 After the initial entry of 133 teams had been narrowed down to 20 in the qualifying rounds in Okotoks; Dick, Armstrong and Gamache were sitting in fifth. As the semi-finals moved to Calgary, the trio gathered up and penned their three cows in just over 27 seconds, seizing first place. One more fast-paced performance in the final earned them the win over the Reserve Champion team of Calgarians Ron Mathison and Christopher Thompson with Arrowwood’s Dusty Wigemyr.

Team Penning is a race against the clock that calls for the highest level of partnership and teamwork. Teams of three riders have 60 seconds to separate three specifically-identified cattle from a herd of 30 and direct them into a pen at the opposite end of the arena. The partnership aspect is the almost uncanny communication that takes place between a rider and their horse as they try to react instantly to the unpredictable cattle being herded.

Dick, from Wetaskiwin, AB, had only competed on his horse six times before coming to the Stampede, but felt the two were a good combination. “He’s a good athlete,” Dick says. “We clicked right away.” According to Armstrong, of Armstrong, BC, it was a similar story for his 7-year old mount, a former cutting horse. “He just took to the sport right away,” Armstrong said. “He’s a natural.” At 14, Spencer Gamache of Quesnel, BC was already riding in his third Stampede. Gamache was Reserve Champion in the 7 Class last year and is looking forward to expanding his buckle collection in the years to come.

The 7 Class in Team Penning was just as action-filled with no end of fancy footwork on the part of both the horses and the cows. Three British Columbia riders: Brent Shaw of Maple Ridge, Trish Esworthy of Langley and Kash Sigouin of Barriere took top honours over the Reserve Champion team of Skylar Hansen of Chestermere, Tara Seabrook of Calgary and Kathy Thompson of Bon Accord.