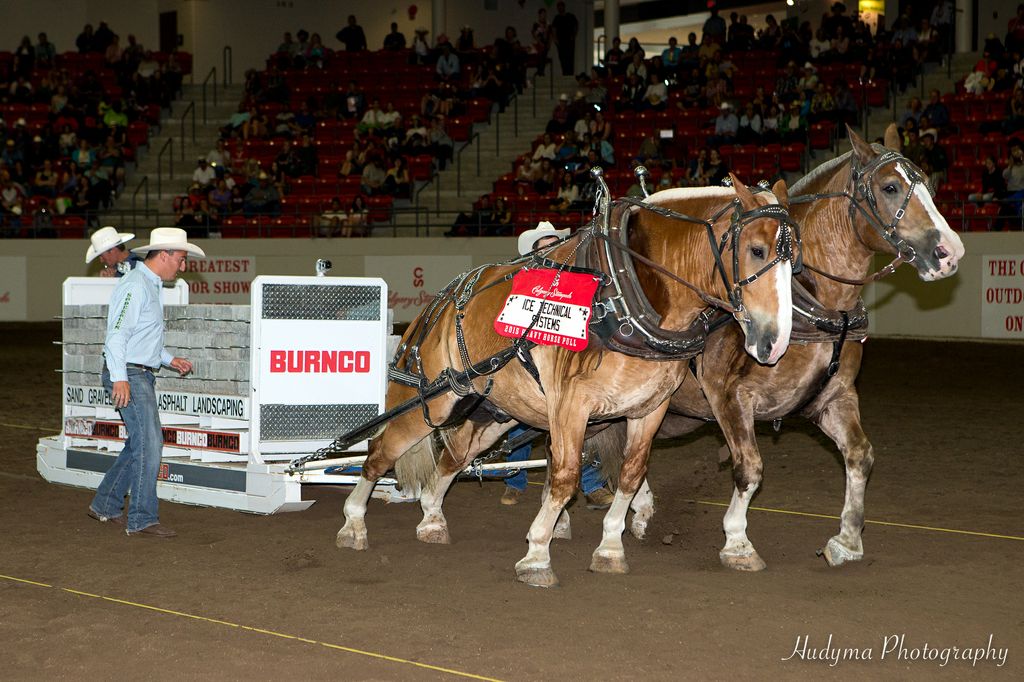 Calgary – Last year, Randy Dodge was on a roll coming into the last Heavy Horse Pull of the Calgary Stampede. His teams had won both Light Weight and Middle Weight honours, but things didn’t work out and Dodge and his partner Stan Grad of Airdrie had to settle for the Reserve Champion title. This year, a new combination – Mike and Fritz – pulled a sledge loaded with 11,500 pounds of concrete further than any of their competitors could manage and the Heavy Weight buckle was Dodge’s.

One of the winning horses, Fritz, was on the team last year. The other horse, Mike, pulled last year in Calgary, but as part of Dodge’s winning Middle Weight effort. “This makes a better team,” Dodge said. “They pulled hard. They just did their business.”

Of the eight teams participating, only three were left after round five. Bumping the load on the sledge to 11,000 pounds for round eight eliminated Jake and Bubba, the Percherons of Ron Martinson of Central Point, OR. When Lumsden, SK’s Ron Sebastian’s horses faltered in round nine, Dodge’s duo managed to go the full distance. “I wanted a full pull,” Dodge said. “It feels good when you go home knowing you had another load in you.”

During competitions, Dodge usually stands alone. “All night I’m watching very, very closely,” he explained. “I don’t like people talking to me. I’ll talk a little bit but I try to focus – just like any other sport.” What he’s looking for is information about the condition of the track. In addition to the dirt, Dodge is also watching the other teamsters. “I watch them to see what they’re doing – what they can and can’t do. I’m always learning. I know a lot about this sport, but I’m always learning from somebody.”

Looks can be deceiving, too. “A lot of people comment to me that I don’t seem nervous,” Dodge commented. “Inside – I’m a wreck!”

Much of the credit for his success, Dodge pointed out, has to go to his wife, Dr. Stacy Semevolos, who is on the veterinary medicine faculty of Oregon State University. “All our vacations are focused around horse-pulling,” he admitted. “She’s always there. She does a lot for me and supports me 100%.”

Going home with the Grand Champion’s buckle means a lot to Dodge, who says he always has fun in Calgary. “It’s a great crowd. They cheer, but they’re respectful,” he said. “The Calgary Stampede does a great job organizing everything.”