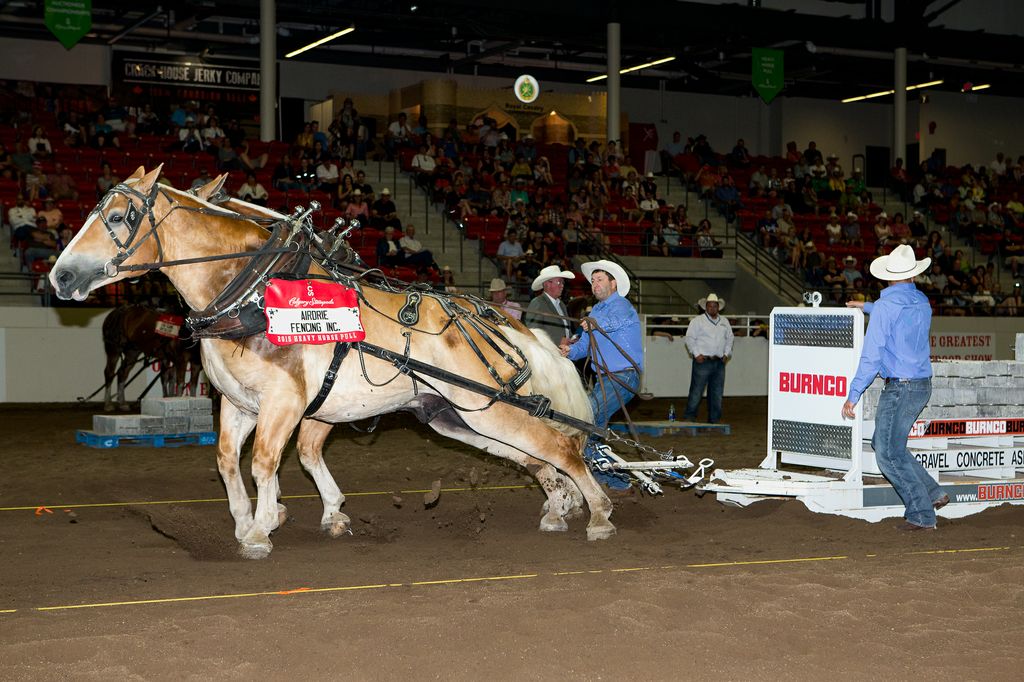 Calgary – Last year, Randy Dodge earned Grand Champion’s buckles in both the Light Weight and Middle Weight classes of the Stampede’s Heavy Horse Pull. On Friday night, his team fell a little short and had to settle for Reserve status in the Light Weight class. Saturday night, there were no mistakes as Simon and Tommy Boy out-hauled their Middle Weight competitors and put Dodge and his partner Stan Grad on top of the results sheet.

While Simon has pulled and won numerous Stampede contests for Dodge and Grad, Tommy Boy was making only his second Calgary appearance. Last year, the Belgian was on the Heavyweight team that finished second. “He was a bit fat last year. He’s in good shape right now,” Dodge said. “I think last year I didn’t have him long enough. I had him for two months and it wasn’t long enough to bring him to a big show like this.”

The Middleweight class is for teams with a combined weight of 3,201 pounds or over but under 3,500 pounds. Lightweight class teams weigh-in at 3,200 pounds or less. Heavy Horse Pulling continues Sunday evening at 7pm in the Agrium Western Event Centre with the Heavyweights who trip the scales at 3,501 pounds and over.

Most of the training for the pulling teams is done at Dodge’s place in Albany, OR before they come up to Grad’s Soderglen Ranch near Airdrie to tune up for Stampede, Dodge says. “I put a lot of time in them - all day, every day, for three teams. I do it all by myself. I don’t have help. I think that pays off when I come here because they know me, like I know them.”

On Saturday evening in the air-conditioned Agrium Western Event Centre, the eight teams on hand started with 5,000 pounds on the boat and all the big horses put the power down and made it through the next few rounds - with the weight increasing by 1,000 pounds each time. It was round six, with 10,000 pounds loaded, before half the teams failed to make the full pull of fourteen feet. The addition of 500 more pounds was the decision-maker as only Simon and Tommy Boy could make the full distance.

“I only just got it, I think – just tipped the pin over,” said Dodge. Kevin Dayluk’s Belgian duo of Dan and Bob managed a pull of just over twelve feet, earning the team its second Reserve buckle in two years.

“Whenever you get a win in Calgary, it feels like a big win,” Dodge said. “This is a great place. They treat us like kings here. The community does a super job. This feels really good.”