CALGARY – There’ll be no hat-trick this year at the Calgary Stampede’s Heavy Horse Pull . . . but we still haven’t seen the game-winning goal.

Two years ago, the Cochrane, Alta.-based Springbank Belgians team of Dennis Weinberger captured the first triple crown in Stampede history, taking the lightweight, middleweight, and heavyweight divisions. Last summer, fellow teamster Randy Dodge of Albany, Ore., struck back with a Stampede trifecta of his own. 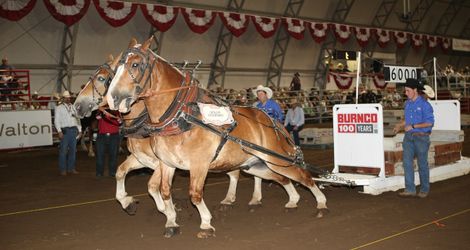 Saturday night, during the 2012 edition of the Heavy Horse Pull, Dodge evened the score with Weinberger at one win apiece – as his Catalyst Accountants-supported Belgian team of Simon and Mike, co-owned by Dodge and Stan Grad’s Soderglen Ranches outfit of Airdrie, Alta., captured the middleweight crown under the Big Top after eight grueling rounds of pulling against Weinberger.

That sets up a monumental finish on Sunday evening at 7 p.m., as the equine giants of the heavyweight division will be brought in to settle the score.

“Any time you beat Weinberger, you’ve done something right,” said Grad following Saturday’s win. “It’ll be interesting tomorrow (Sunday). Oh, boy. Randy’s pulling our ‘A’ team . . . and Dennis will have a hell of a big pair of horses in here.”

Dodge pulled out victory from a 10-team field on Saturday during North America’s richest pull, with Simon and Mike managing an 11,500-pound weight sled the full 14 feet and allowing Dodge to pocket $3,000. The only other team left in the showdown, the New West Truck Centres-supported outfit of Dillon and Doc – owned by Weinberger and Scott Fisher of Edwardsburg, Mich., with Weinberger on the lines – could only drag that same 11,500-pound sled 47 inches, settling for runner-up status and a $2,500 pay day.

“That was awesome, and that was Mike’s second year in a row (in the winner’s circle),” noted Dodge, the defending champion in the Stampede middleweights, whose teams weigh in at a combined 3,001 to 3,500 pounds. “They work together like one. They are just incredible.”

Grad figures a victory like Saturday’s has a lot to do with the teamster, too, noting that five teams were still battling gamely away at the 10,500-pound mark. “Randy’s a master teamster. He’s one of the best there is in North America,” said Grad. “Randy has a way of working horses, to where he maximizes their effort. He offsets the weak one with the strong one. He also comes from a long line of pullers, and a night like tonight is when that pays off – grandfather did it, father did it.”

Third place overall, and a cheque for $2,000, went to the Fort Steele Heritage Town-backed duo of Jay and L.D., teamstered by Fisher and co-owned by Weinberger and Fisher, that pulled 11,000 pounds a distance of 85 inches.

The Equis Aviation-backed pair of Herb and Hawk, owned by Grad and teamstered by Nicolas Pouso of Mercedes, Uruguay, managed 21 inches at 11,000 pounds for fourth place and $1,750.

Libby Peters of Bright, Ont., only the second female teamster in the history of the Stampede’s Heavy Horse Pull, lasted until the fifth round, her Sterling Western Star Trucks-supported pairing of Jim and Ike pulling a 10,000-pound sled 11 inches and finishing ninth overall.

The big boys of the heavyweight division, which take centre stage under the Big Top on Sunday evening, tip the scales at a combined 3,501 pounds and more.

Owing to the Stampede’s 100th birthday bash, the Heavy Horse Pull committee has introduced a Centennial Trophy this year. The horse-pull hardware will bear the names of the winners in each weight class for 2012 and beyond.