CALGARY – Why is Dustin Gonnet a heavy hitter in the cutting arena? Put it this way — he’s had plenty of time to ruminate about ruminants. In other words . . . Dustin Gonnet knows cows.

Gonnet, 29, has arguably been the most consistent performer in recent years at the Calgary Stampede’s fall Cutting Horse Futurity, presented by Wrangler. He’s also come oh-so-close to nabbing an Open championship at the Stampede’s annual Cutting Horse Competition — which celebrates its 40th edition this year when it takes over the Big Top from Tuesday, July 10 through Thursday, July 12. 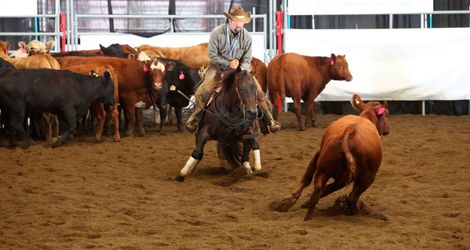 “My whole life, I’ve moved cows, sorted calves, doctored cattle, rode horses. Where I grew up in Saskatchewan (south of Saskatoon), my dad (Peter) runs a PFRA (Prairie Farm Rehabilitation Administration) community pasture, and looks after about 1,350 mother cows. So I pretty much grew up on horseback . . . I was on horseback with my dad when I was, shoot, two or three years old,” says Gonnet, a cutting horse trainer who operates Gonnet Performance Horses near Cayley, Alta.

“Cutting — it’s definitely training horses. But knowing cattle, and being able to read cattle, is a huge part of the cutting game,” he adds. “I think the way I was raised has helped a whole bunch, for darn sure.”

For the fourth straight year, the Stampede’s elite Cutting Horse Competition, which draws the sport’s best practitioners from both sides of the border, will be a participating event in the National Cutting Horse Association’s Mercuria/NCHA World Series of Cutting. The Stampede will mark the fifth stop on the nine-event World Series tour, which began in late January in Augusta, Ga., and will conclude in October at Lyon, France.

The sport of cutting shines a spotlight on the pure athleticism, instinct, agility and intelligence of the cutting horse. With horse-and-rider teams attempting to cut three individual cows out of a herd within 150 seconds, cutting has evolved into one of the most exciting equine events in North America. The NCHA counts more than 20,000 members from a wide range of backgrounds, and sanctions more than 2,200 events across North America each year, with tens of millions of dollars in prize money awarded.

Thanks to the involvement of the Mercuria/NCHA World Series, the Stampede Cutting Horse Competition will offer $25,000 in added prize money to each of the Open and Non-Pro divisions. The Youth division will see five Bill Collins Youth Excellence Awards scholarships go up for grabs, in addition to Stampede champion and reserve championship buckles. And this year, winners of the Open, Non-Pro, and Youth classes will be awarded limited-edition Centennial Trophy Saddles, handcrafted by Vic Bennett Saddles of Sherwood Park, Alta. — a once-in-a-lifetime opportunity created in honour of the Stampede’s Centennial celebrations.

The finals on Thursday, July 12 begin at 5 p.m. under the Big Top — starting with the amateur riders of the Non-Pro division, following with the trainers and professional cutters of the Open division, and concluding with the Youth division.

Gonnet, who studied under Irricana, Alta.-based cutting horse trainer Doug Reinhardt before hanging out his own shingle about a decade ago, has bagged seven grand champion or reserve champion buckles at the Stampede’s fall Cutting Horse Futurity since 2008, including the Open Derby title last October on Pepto Boonlena 007, owned by Connie Down-Cicoria of Calgary. He also placed third in the Open division at the 2010 Stampede aboard Christinas Blue, owned by Calgary’s Ron Patton — then moved up to second overall, and a reserve championship, last summer on the same mare. Gonnet and Christinas Blue proved a terrific tandem for four years — teaming up for an Open Derby title at the 2008 Stampede fall Futurity, victory in the $10,000 Novice class at the NCHA’s Western Nationals at Reno in 2011, and finalist spots at seven other limited age events.

“We actually retired her last year. We’ve got her in foal this year. She was really getting good . . . but I’ve just seen way too many of those good mares get shown and shown and shown until they weren’t good anymore,” he says. “I wanted to make sure there was enough horse left that if, some day in the future, I decide to break her out for the Calgary Stampede, or if my son wants to ride cutting horses, she’d be a mare with plenty left in her.”

After his Stampede reserve title last summer, Gonnet remarked: “If it weren’t for Ron Patton and my wife, I wouldn’t be where I am today.”

Patton has been one of Gonnet’s top clients over the years, and the two have also begun raising cattle as a joint venture at Gonnet’s spread. “He’s done more than I could have asked of anybody to help me out,” says Gonnet.

As for Gonnet’s wife Marla, she’s been instrumental in the success of Gonnet Performance Horses for the past eight years, performing loping, turnback, horse-doctoring, and bookkeeping duties, among others. “She’s always been involved with cattle, just like myself. Her dad (Neil Haaland) actually brought cows to the pasture my dad runs, and her brother (Chad) worked for my dad. Our families have known each other for a long time,” says Gonnet. “She does anything and everything. She really does it all.”