CALGARY – It is the Western equine equivalent of multitasking, and Brad Pedersen seems to have it down to a science.

For the second time, the Lacombe, Alta.-based cutting and cow horse trainer has emerged from the Calgary Stampede clutching the Elite Western Rider Award, presented by Parsons — an annual salute to versatility in the saddle throughout the Stampede’s three Western Performance Horse events. 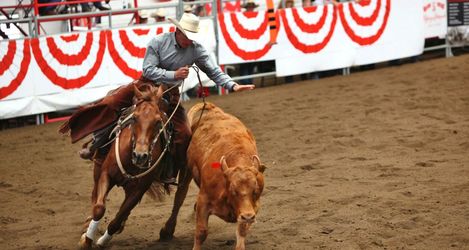 Pedersen, 41, was the last winner of the Elite Western Rider award in 2010. There was no champion in 2011, owing to the coveted piece of hardware’s exacting standards.

“It’s an honour to win this award. It’s always tough competing in two events,” says Pedersen. “It was a tough, hot week at Stampede this year . . . sometimes it takes its toll on your body. You get the aches and pains. But it’s just like anything — you just go hard, do your job, and get through it.”

It’s fair to say that Pederson does his job with a consistent level of excellence, and the Centennial Stampede was no exception.

The Elite Western Rider Award, presented by Parsons, was introduced in 2009 and goes to the competitor who excels with proficiency and agility in at least two of the Stampede’s three Western Performance Horse events — the Team Cattle Penning Competition, presented by Calfrac Well Services; the Cutting Horse Competition; and the Working Cow Horse Classic, presented by Tesla Exploration Ltd. Competitors earn points toward the title with Top-10 finishes in at least two of those disciplines.

Pedersen topped all rivals by winning the Open Bridle category of the Working Cow Horse Classic on July 15 aboard Smart Sassy Date, owned by Greg Gartner of Sherwood Park, Alta. — and finishing ninth overall in the Open division of the Cutting Horse Competition on July 12 aboard Smart Koki Joe, owned by Don Halladay of Rocky Mountain House, Alta., missing out on the eight-team Open final by a slender half-point.

“It takes a totally different approach. In cutting, there’s a real art in developing the horse. It’s about identifying the cow sense in the horse, nurturing it, and getting that horse to rise to the top. Brad has that knack of being able to nurture cutting horses, rather than forcing it,” says Kollewyn. “In working cow horse events, the rider has to have total control of the horse, because it’s up to the rider to read the cow.

“The horse has to listen to the rider, no questions asked. And it’s all done at top speed, which is where the skill level really becomes apparent, because horses tend not to listen as well at speed. Brad has his horses listening to him all the time.”

Pederson has built an even larger profile in the cow horse world. He was the youngest rider ever inducted into the Canadian Supreme’s Hall of Fame, back in 2006, and won its Open Snaffle Bit Futurity an incredible 11 times in a row. He’s also claimed a pair of Canadian Open Snaffle Bit Futurity titles, and is a former Open Bridle reserve champion at the National Reined Cow Horse Association (NRCHA) world championships in San Angelo, Texas. This past February, he and Smart Sassy Date qualified for the Open Bridle final at the NRCHA worlds, but an unfortunate fall left them out of the ribbons.

For both disciplines, Pedersen subscribes to the practice-makes-perfect theory: “It’s repetition. We ride 20 to 30 horses a day (at his training facility near Lacombe), doing it over and over again. As far as showing goes, you never have two runs that are identical, so it’s all feel and timing — and it’s the repetition that helps you develop those skills.”

The Stampede is by no means the only show that puts Pedersen on his multitasking toes. The annual, week-long fall Canadian Supreme includes both cutting and cow horse events, and “the last five years, I’ve probably shown 18 to 20 horses a year — eight to 10 cow horses, and eight or 10 cutters,” he says.

“My wife (Heather) keeps us pretty organized, concentrates on the logistics so that I can concentrate on riding horses,” adds Pedersen. “And after Red Deer, a week later we go to Calgary (for the Stampede Futurity). By the time that’s over? I’m ready for a break.”

This year’s Calgary Stampede Cutting Horse Futurity, presented by Wrangler, will be held in the Corral on Stampede Park from Oct. 10 to 14.