CALGARY – It’s called The Big Shoe. And given the size of the subject material, it might best be described as a really, really Big Shoe. 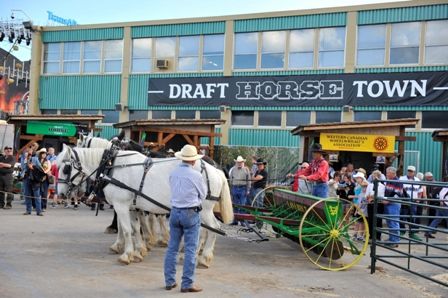 Draft Horse Town, which pays homage to the working-class gentle giants that helped build Western Canada, has been one of the most popular exhibits at the Calgary Stampede since its 2010 debut. And this year, organizers will be showing off their theatrical chops — with many of the individual demonstrations being corralled into a twice-daily, one-hour presentation called The Big Shoe.

“A lot of these demonstrations and presentations were great on their own, but we thought they would be even stronger if we pulled them all together, and added a strong narrative to it,” says Lane, the deputy mayor of Draft Horse Town.

Every day at the Northern Lights Arena, from Friday, July 6 through Sunday July 15, at 1 and 5 p.m., Draft Horse Town exhibitors such as the Bar U Ranch National Historic Site of Longview, Alta., the Calgary Fire Department, and the Roadbuilders and Heavy Construction Heritage Society of Canada will help tell the story of the mighty draft horse and its indispensable role in establishing Western Canadian society.

Local blues musician Tim Williams will be performing original music, and playing the role of troubadour, for The Big Shoe. And after each performance, audience members can step next door to Saddledome Lane, the home of Draft Horse Town, to meet these magnificent animals and the teamsters who look after them.

“We were looking for a better way to interpret the draft-horse story. Now, for example, when we present the Calgary Fire Department’s firewagon, we can pull it in, drop off the horses, show some original footage on a screen of burning buildings in Calgary, and actually spray water on it,” says Dale Befus, mayor of Draft Horse Town. “Sometimes, a simple explanation doesn’t resonate with everyone. We believe that in a setting like this, the audience will be thinking, ‘Ah — that makes perfect sense.’ ”

Draft Horse Town, nestled between the Agriculture Building and the Scotiabank Saddledome on Saddledome Lane, is an engaging venue that offers Stampede visitors a slice of living history, plenty of hands-on activities, and a close-up look at these sturdy, handsome, industrious beasts.

Guided by their human counterparts, draft horses plowed the fields, pulled the wagons, carriages, and firefighting equipment, built the roads, and hauled the dirt and rock from building sites during the settlement of Western Canada.

With the Stampede celebrating its Centennial in 2012, Draft Horse Town is also highlighting a century of change.

The Farm Equipment committee will be bringing in a new four-wheel-drive tractor as a stark point of contrast to a binder, a pair of seed drills, and a plough from a hundred years ago. The Roadbuilders Heritage Society will be doing the same thing, setting up a new front-end loader and a vintage Fresno scraper, cheek by jowl.

There’ll be four pens of heavy horses, including mares and foals, with the Percheron, Clydesdale, Belgian, and possibly Shire breeds represented.

The Bar U Ranch NHS, which is credited with saving the Percheron breed in Europe after the First World War, will offer visitors a chance to ride one of its famous equines. Stampede visitors will be able to take a spin in a heavy-equipment simulator, courtesy of the Roadbuilders Heritage Society, while smaller folk are sure to enjoy a sandbox with toy loaders, graders, and bulldozers.

Fort Steele Heritage Town, based in southeastern B.C., will return for a second year with its Michigan logging wheels and its famous black-and-white Clydes. The Draft Horse Town Historium will be combining the old and the new, antique photos mingling with SMART Board activities.

Meanwhile, the Stampede’s Blacksmith committee will be banging out horseshoes over glowing coke forges, while wheelwrights will demonstrate the craft of building wood-spoked wheels. “The wood and fire and steel together, with lots of smoke being produced, draws a crowd every time,” says Befus with a chuckle. “That’s a little gold mine that we haven’t fully exploited yet — but we will.”

As for the stars of the show? The response through two years’ worth of Draft Horse Town has been overwhelming, and that isn’t expected to change. “Most people have stories about uncles or grandparents who were involved with heavy horses. And everyone loves these horses. It’s just amazing,” notes Lane. “It’s the gentle-giant thing — people are in awe of their size, but also their temperament.”