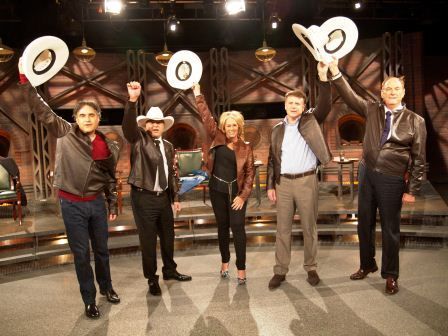 In 1912, Guy Weadick convinced the Big Four to invest $100,000 to celebrate the Wild West. That investment resulted in an event that has grown into The Greatest Outdoor Show on Earth, and was recognized by CNN as one of the top five places to party in the world.

“The Calgary Stampede was created from one man’s vision and four entrepreneurs’ trust,” says Deanne Carson, vice-president Marketing and External Relations. “The Big Four took a risk with Guy Weadick and invested in his big idea, very similar to what the Dragons do for Canadians. We wanted to honour them for believing in ideas and helping them become realities.”

Tourism Calgary and the Stampede recognized the Dragons to celebrate Calgary’s pivotal 2012 year, marking the Centennial of the Calgary Stampede and Calgary’s Cultural Capital of Canada designation.

“The Dragons embody the maverick spirit that has built Calgary into a leading tourism destination,” said Gisele Danis, vice-president, marketing, Tourism Calgary. “Last year, Calgary outpaced every other major Canadian centre for tourism growth, and we’re inviting all Canadians to visit us in 2012 and experience first-hand the people and energy underneath our iconic White Hat.”

The traditional Calgary White Hat has been worn by Prime Ministers, Presidents and the Dalai Lama. Like a mayor who hands over the keys to his city as a symbol of hospitality, Calgary instead has offered white cowboy hats to dignitaries since 1947.

The Calgary Stampede takes place July 6 – 15, 2012 and is being broadcast exclusively on CBC TV, cbcsports.ca and bold across Canada.  Calgary also has dynamic cultural events running year-round -- feel the energy that is Calgary.