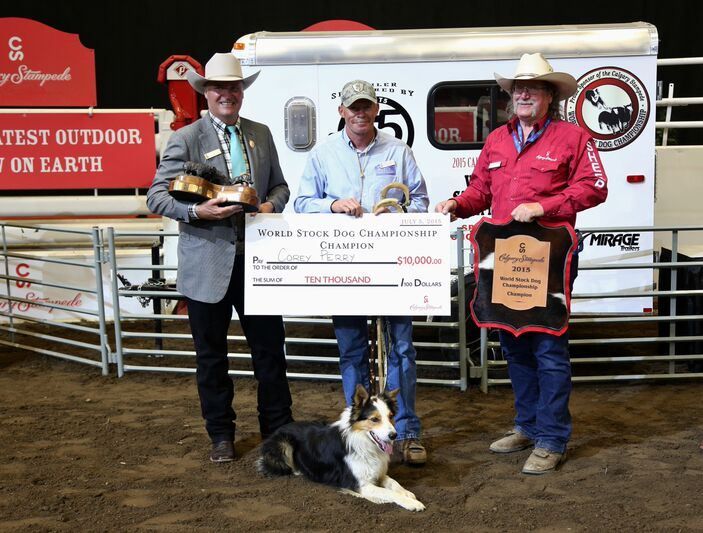 Calgary – In his twelfth year of competing with stock dogs, Corey Perry had won most of the sport’s big events in Western Canada. But coming into his seventh year of competition at the Calgary Stampede’s World Stock Dog Championship, Perry’s best previous results had been a pair of thirds. After the 2015 Stampede competition, Perry is the Grand Champion.

Training and competing with stock dogs is a hobby for Perry, who works in the oilpatch. That hobby takes him as far afield as the United States and even Brazil where he has conducted clinics and judged competitions. Brazil is where he found Mirk – the dog that won Sunday’s World Stock Dog Championship final. “Mirk is five years old,” Perry says. “I spotted him in Brazil and brought him over as a seven-month old. I just liked his style, his keenness and his desire to work.”

“It takes a lot of training and commitment and finding a dog that suits you,” says Perry. “It’s a lot of fun. If I lose, I get over it pretty quickly. We have to try and outsmart the sheep.” When they don’t, Perry laughs, “It’s humbling.”

“Calgary was one of my targets. Coming into Stampede, I was fairly confident,” Perry says. “Both dogs had been in the final before, but it’s so competitive. There’s a lot of good handlers here. If you don’t have a good set of sheep, it can put you out of the running fairly quickly. I was lucky this year. Now it’s off my bucket list, but the pressure will be on me next year.”