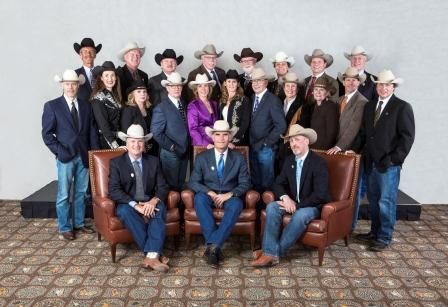 It was with this characteristic enthusiasm that Mike Casey – a Stampede volunteer for more than 37 years – handed the reins to Bob Thompson, the new president and chairman of the board for the next two years. About 650 shareholders attended the annual meeting at BMO Centre, where they recapped the year that was, reviewed the financial statements and voted in 11 directors – eight incumbents and three first time directors. The board also named Dave Sibbald as the new second vice-chairman, who in four years’ time, will become the new president and chairman of the Calgary Stampede, following Bob Thompson and his immediate successor, first vice-chairman Bill Gray. More information about our board can be seen at About Us on calgarystampede.com.

At the meeting, chief executive officer Vern Kimball shared his thoughts around the importance of developing a spirit of inclusiveness as we kick off the Stampede’s next century. “We need to deal with the march of generations thoughtfully and respectfully and enable shareholders to pass the torch to the next generation…we need to be inclusive of new Calgarians, we also need to be inclusive of young Calgarians, urban Calgarians and even the skeptical Calgarians,” he said. “The Stampede's future success is dependent on our ability to include all Calgarians - both those we are talking to already and those we have yet to meet.”

After at least four years as an active volunteer, potential shareholders are nominated to be a shareholder by a committee chair. The board approves all shareholder nominations. After a volunteer is invited to become shareholder, he or she purchases a share for $5, which permits him or her vote at the annual general meeting. Shares do not grant dividends or appreciate, nor can they be sold. Shareholders who don’t attend the shareholder meeting by proxy or in person for three years in a row lose their shareholder status. The Calgary Stampede has 1,858 shareholders.