CALGARY – Who’ll be looking down on the Calgary Stampede’s Centennial festivities with a big, benevolent smile? Well, Guy Weadick, of course. Can’t forget the Big Four, either.

And Frank Sherring? His smile will be as wide as those big ol’ steel wheels on his vintage masterpiece. 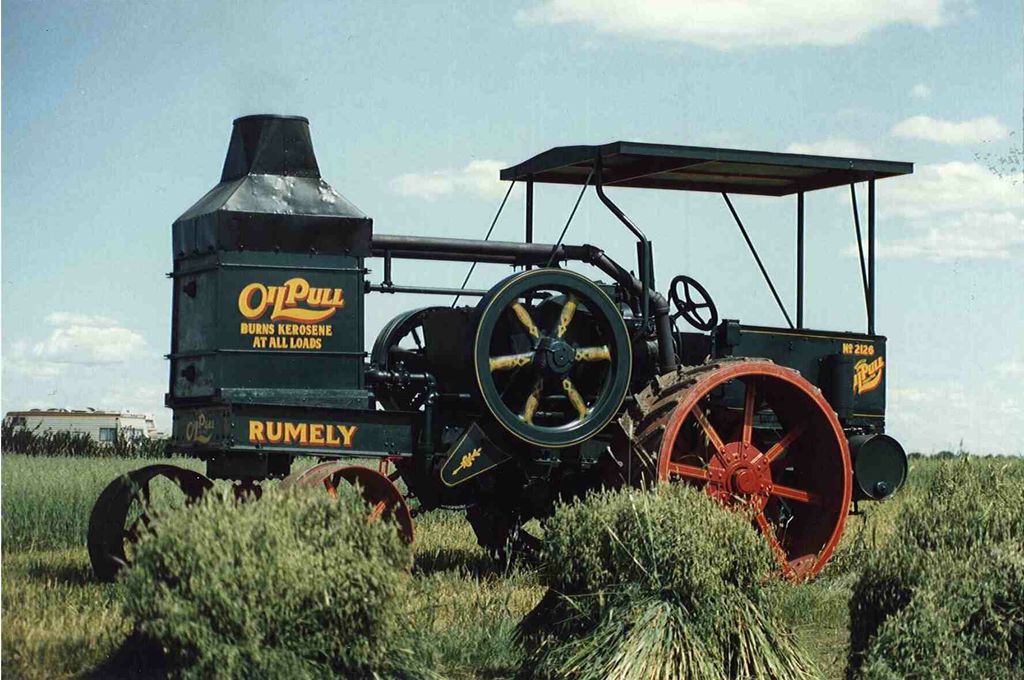 The Stampede’s Farm Equipment committee wanted to pull out all the stops for The Greatest Outdoor Show on Earth’s hundred-year birthday bash this summer. And they did it — by finding a farm tractor that’s older than the Stampede itself, and still in working order to boot.

The exotic iron in question is a 1911 Rumely OilPull Model B 25-45 owned by Ted Sherring of Medicine Hat, and kept at the Pioneer Acres museum near Irricana, Alta. The steel-wheeled, kerosene-burning masterpiece was lovingly restored by Ted and his father Frank, a former heavy-duty mechanic who passed away in September 2010.

It will be the centerpiece of the Stampede’s 22nd annual Vintage Tractor Pull and Vintage Tractor Show & Shine on Saturday, July 7 and Sunday, July 8 under the Big Top — a fact that has Ted bursting with pride.

“I’m ecstatic already. And I guarantee that Dad will be beaming from ear to ear. It was his baby, and it was always a dream of ours to have it at the Stampede,” says Ted. “I know Dad will be as proud as punch, especially since the Stampede is celebrating its 100thyear.”

The Sherrings’ 23,000-pound behemoth was purchased new by the Skooling Ranches of Hussar, Alta. Measuring 25 horsepower at the draw-bar and 45 horses at the belt pulley, this Rumely was used for both ploughing and threshing, and reached about three kilometres per hour in forward gear.

Ted and Frank Sherring purchased it from a Drumheller scrap dealer in the early 1970s, slowly collected original parts from across North America, and in 1989 began the two-year restoration process in earnest — even travelling to a Rumely reunion in the U.S. that year to make absolutely certain that their makeover was letter-perfect. The resulting paint job — Brewster Green and Trend Red, with Harvest Yellow pinstriping and hand-painted replica decals — mimic the exact appearance of the company’s 125th Model B. “We wanted it to look exactly the way it came out of the Rumely factory,” says Ted.

The 1911 Rumely OilPull has made appearances at Spruce Meadows and at the Lethbridge Ag Expo, but has been more or less stationed at Pioneer Acres for the past 20 years. Dave James, who chairs the Stampede’s Farm Equipment committee, jumped at the chance to make it part of the 2012 Vintage Tractor extravaganza.

“We needed a major eye-catcher as part of the show this year, and what better way than to get a tractor that was built in the same era as the Stampede starting up?” says James.

A by-invitation affair, this year’s Vintage Tractor Pull and Vintage Tractor Show & Shine will draw 36 immaculately restored vintage beasts from Alberta, Saskatchewan, and British Columbia, built in 1960 or earlier, for a stroll down mechanical memory lane.

The Vintage Tractor Pull will see competitors and their stout-hearted steeds compete in six different weight classes, from featherweight (1,000 to 3,999 pounds) up to the giants of Class 5 (8,500 to 9,999 pounds). International Harvesters, Olivers, John Deeres, Minneapolis Molines, McCormicks and more, with horsepower of 20 up to 80, will demonstrate their sled-pulling prowess under the Big Top, with winners determined via the highest aggregate score over two rounds. The first round will get hand-cranked up, so to speak, on Saturday, July 7 at 5 p.m., and the finale will be staged on Sunday, July 8 at 3:30 p.m.

Meanwhile, the Vintage Tractor Show & Shine will run for an hour from 4 to 5 p.m. under the Big Top on Saturday, July 7, with tractors prepped, polished, and primed to within an inch of their lives — and the winner again receiving a handtooled Stampede belt buckle.

Perry and Ellen Widdifield of Markerville, Alta., will bring back their immaculately restored 1924 Waterloo Boy, built by John Deere, and 1930 Hart-Parr. There’ll again be metal-versus-muscle exhibitions, as tractors go toe-to-hoof with a team of Belgian heavy horses to determine who’s got the ultimate horsepower. There’ll also be a vintage tractor presentation on Sunday, July 8, as the Vintage Tractor Pull and Vintage Tractor Show & Shine are highlighted at the Agriculture 100 exhibit in the Victoria Pavilion. “I think it’s going to be a heck of a show this year,” says James.