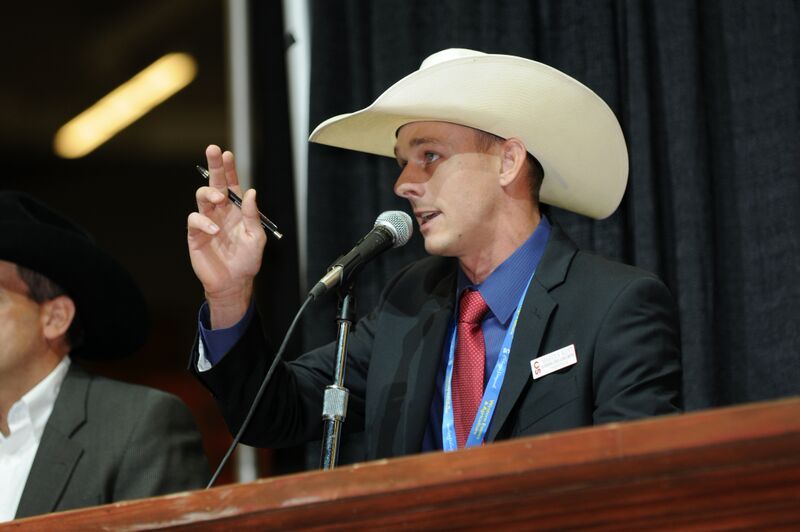 Calgary – Bloodlines mean a lot in the livestock world. Apparently, they might have some significance in the livestock auction world, too. “I believe I’m third generation,” says Marcus Kent, who trekked all the way to Calgary from Florida for the International Livestock Auctioneer Championship – and will go home as the 2015 Grand Champion.

“My family got me into it,” he explains. “There’s about 17 or 18 auctioneers in my family.” There were 27 of the top auctioneers on the continent at the Olds Auction Mart on Friday evening as the first round of the ILAC began. On Saturday, the top ten gathered at the Agrium Western Event Centre to sell consignments of cattle, as well as a variety of goods ranging from Stampede Grandstand tickets to meat to jewelry. Four of the finalists made the top ten last year. Kent was making his first Calgary appearance.

The ILAC is a judged event, with a panel of five experienced judge from both the USA and Canada, assessing each auctioneer on rhythm, clarity, voice control and intonation, appearance, mannerisms, deportment, repartee and timing, as well as livestock knowledge and their ability to spot bids and conduct a sale.

“I found out about (the ILAC) at another contest in Minnesota back in January,” Kent says. “The competition is tough. There’s a lot of good auctioneers here. It’s also fun. I love meeting new people and meeting different auctioneers. The toughest thing for me was the market. Cattle prices are so much different here from in Florida.”

Going a little later in the contest may have helped him, Kent thinks. “It calms your nerves a bit and you get a feel for the market.” Listening to his competitors has another benefit, he thinks. Although he’s been an auctioneer for nine years, he admits, “I’m not where I want to be. I’d like to further my skills. I like to listen to different auctioneers and say, ‘That sounds good. It pops good. I think I’ll try that.’”

“I felt good about my run yesterday and I felt good about it today,” Kent says. “I knew it was anybody’s game. I just take what they give me. I wasn’t expecting to win. I’ve had a blast up here. It’s been great. Everybody’s been real, real good to me.”

Someone to watch in the future is Ryan Konynenbelt of Nobleford, AB who also made his first appearance at the Stampede ILAC. He was named Rookie of the Year, as well as finishing third overall.