CALGARY – Clint Swales likes to get the lead out . . . but not this way. 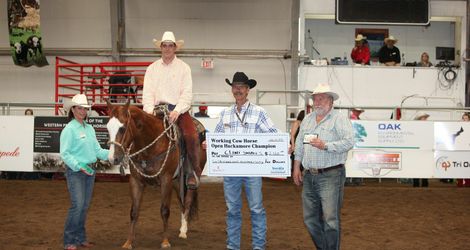 Besides being a top-notch professional reined cowhorse trainer and an emerging force in the performance arena, the 28-year-old Swales is also an artist of some repute, with his pencil sketches showing Western and Spanish influences. Unfortunately for Swales, he had plenty of time for vaquero-style artwork last summer — with a June quadding accident near his High River, Alta., training stables keeping him out of the saddle for five months, and limiting him to just one competition during the entire 2011 calendar year.

“I basically lost the whole season because of that broken leg. It was a really bad break — I broke the tibia in two places, and basically crushed the fibula right in my ankle joint. They had to go in and plate the fibula, and put a rod through the tibia to get everything put back together,” says Swales.

"It was pretty tough . . . I had some really nice horses in the barn, and I lost some of them because I couldn’t ride them and I couldn’t fulfill the show schedule for them. A couple of them went to my sister (Veronica); it was great that she got a chance to show them, and she did really well on them,” he adds. “But it was still a little depressing at the same time, because I really wanted a chance to do that myself.”

A two-time National Reined Cow Horse Association (NRCHA) world champion who’s earned his fair share of Calgary Stampede buckles over the years, Swales will be looking to make up for lost time as the Stampede’s annual Working Cow Horse Classic, presented by Tesla Exploration Ltd., takes over the Big Top later this week. The Working Cow Horse Classic will wrap up the Stampede’s trio of Western Performance Horse events — with the first go-round starting at noon on Friday, July 13, and the finale slated for 11 a.m. on Sunday, July 15.

The Stampede’s Working Cow Horse Classic, presented by Tesla Exploration Ltd., represents a tip of the Smithbilt hat to the tradition and heritage of the early 18th-century Spanish vaqueros in California. Horse-and-rider teams are judged on their authority, discipline and precision in two distinct areas – reined work, or dry work, and cow work, otherwise known as fence work. Reined work, labeled “Western dressage” by some, is based on a predetermined pattern of manoeuvres, including figure-eights, straight runs, sliding stops and 360-degree spins. Cow work, the truly thrilling portion of the show, sees the horse-and-rider team first box a steer, then send it at full tilt along the fence, heading it off and turning it both ways, before finally circling it once in each direction in the centre of the arena.

Clint’s older brother John, of Millarville, Alta., has virtually owned the Open Bridle division since the Working Cow Horse Classic was introduced into the Stampede lexicon in 2001, with four consecutive buckles heading into 2012 and seven overall. Clint, mind you, is no slouch — with Open Hackamore and Limited Open Hackamore sweeps in both 2007 and 2010, the latter year on The Mask, and a Limited Open Bridle title aboard Pure Latigo in 2009.

Topping all his successes to date are his back-to-back global crowns in Limited Open Hackamore at the NRCHA World Championship in San Angelo, Texas. His inaugural win in February 2009, aboard Pure Latigo, marked the first world title ever claimed by a Canadian horse and trainer at the NRCHA worlds, and he followed it up a year later with victory on Twice the Bet.

Clint will be hauling out those big guns — Pure Latigo, owned by Calgary’s Bob O’Callaghan, and his own Twice the Bet — in Open Bridle at the Stampede this year. And if his 2012 season to date is any indication, Clint will be one to watch under the Big Top.

He and Twice the Bet won the Two-Rein Division at the Cowtown Derby in Claresholm, Alta., in late May, and Clint then claimed bridle classes on both Twice the Bet and Pure Latigo at another Alberta Reined Cow Horse Association (ARCHA) event a month later, also in Claresholm.

“My first time out in the show ring this year, I didn’t feel like I had the same confidence I’d had before I broke my leg. I guess it was because I hadn’t shown a horse for so long. But things have gone well,” he says in reflection. “I’ve been out quite a bit this year. I got a few new horses that I’ve been getting out and about, trying to get them seasoned, and I’ve got some of my old horses back as well. I’ve had a pretty good year so far.”

The Working Cow Horse Classic will also wrap up competition for the Stampede’s fourth annual Elite Western Rider Award, presented by Parsons, which goes to the top cowboy or cowgal competing in the three Western Performance Horse disciplines. All riders who take part in at least two of the events — including Calgary Stampede Team Cattle Penning Competition, presented by Calfrac Well Services, and the Calgary Stampede Cutting Horse Competition — are eligible for the champion’s buckle.