CALGARY – His actor namesake doesn’t say a word in front of the camera. As for this Mr. Beane? His work at the forge certainly speaks for itself.

In recent years, Steven Beane has established himself as a world-class farrier. And on Sunday afternoon under the Big Top, the anvil-basher from Northallerton, Yorkshire, England, further entrenched that reputation – emerging from a heated battle for his fourth consecutive win at the Calgary Stampede’s 33rd annual World Championship Blacksmiths’ Competition, presented by Mustad. Beane is just the third man to claim four straight crowns at the WCBC, known globally as the “Olympics of blacksmithing.” 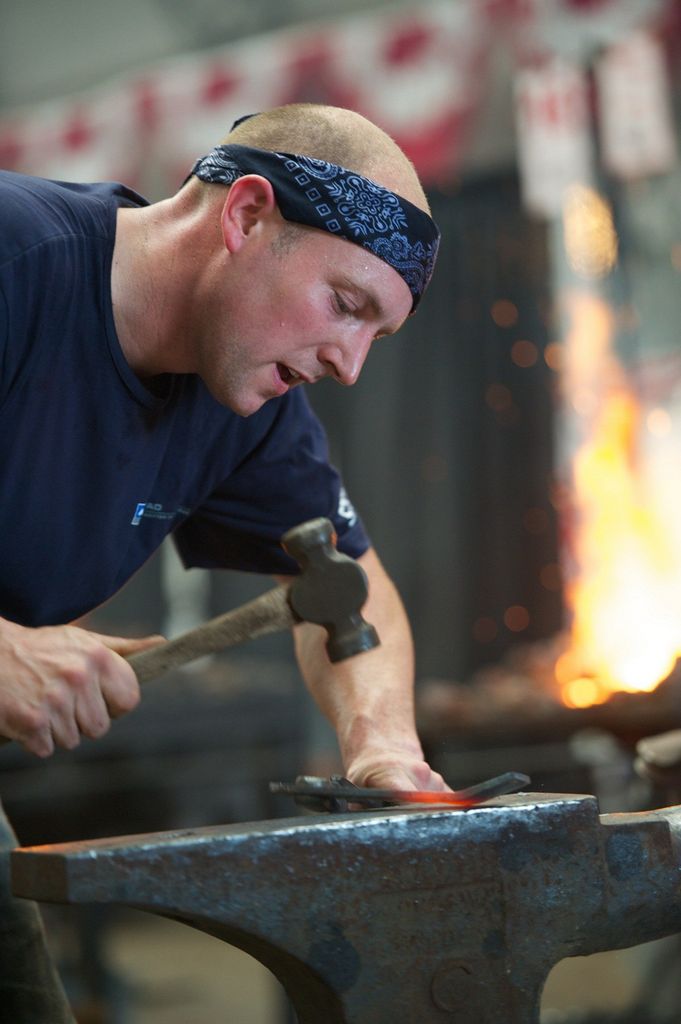 “It probably won’t sink in for a while, you know? I need to get back, get home, spend some time with my family. They haven’t seen a lot of me for a while.”

As winner of the 33rd annual WCBC, presented by Mustad, Beane takes home a $10,000 cheque, a limited-edition bronze trophy, a handtooled Stampede buckle, and a champion’s jacket, among other prizes. Grant Moon of Wales finished second, followed by third-place David Varini of Scotland, fellow Scotsman Derek Gardner in fourth, and France’s Yoann Policard in fifth.

Intriguingly, Moon is the only competitor to win a Calgary title five straight times, from 1988 through 1992. Canada’s Bob Marshall won the first four editions of the WCBC, from 1980 through ’83. Moon, who returned to the competitive blacksmith arena in 2008 after a decade-long absence, is impressed with Beane’s grace under fire.

“It’s extremely difficult to win this four times in a row. Steven’s almost certainly one of the best competitors that’s ever been,” said Moon, who’s won the WCBC a total of six times.

“I’m more than holding my own. I’d say I’m really happy with this result. A pretty good accomplishment today,” added the 50-year-old Moon. “I think Steven’s just a bit more hungry than I am. I just play at this. It’s my golf. I’m here to make up the numbers for the other guys.”

In all, 72 competitors from 14 different countries – England, Denmark, New Zealand, Scotland, Australia, Northern Ireland, Norway, France, Wales, Sweden, Switzerland, Germany, the United States, and Canada – went at it hammer and anvil during the 33rdannual WCBC, presented by Mustad, through four intense days of competition under the Big Top, with more than $50,000 in cash and prizes at stake.

The final five were put through their paces all weekend under a sweltering Big Top, collecting points in 10 different classes including Sunday’s semifinal and final.

During Sunday morning’s semifinal, the 10 remaining modern-day Vulcans shoed the front feet of a light draft horse in 60 minutes. After a brief equipment break, the five finalists were right back at it, given another 60 minutes to shoe the hind feet of that same horse. This year’s judges, David Wilson Sr. of Scotland and Shayne Carter of the U.S., based their decisions on shoe forging, finish, and nail placement, as well as preparation and balance of the horses’ feet, using a blind judging process.

Beane did not author a runaway victory like he did in 2011, but shone in Sunday’s showdown.

“I was in third place heading into the semifinals (jumping to first overall heading into the final). I felt I was getting better through the week, but I knew this last day, the semifinal and final, was more geared toward my strengths,” he said. “And for the fourth year, now, I’ve had the same two-man (shoeing-class) partner in Derek Gardner, and he’s fantastic to work with.

“He’s so unselfish. Probably the most unselfish guy I know. When we practice together, we help each other, look at each other’s stuff. He would tell you everything to help you get better.”

England’s Darren Bazin, Denmark’s Henrik Berger, Sweden’s Jesper Eriksson, American Gene Lieser, and Paul Robinson of Northern Ireland participated in semifinals, but were eliminated in their quest to earn a spot in the final five.

Beane, Gardner, Varini, and Robinson emerged as the WCBC’s Four Man Team Draft Horseshoeing champions, splitting a prize pot of $8,000. Moon was named this year’s forging champion, Beane was hailed as shoeing champion, and Eriksson was tapped as the show’s rookie of the year; all three awards are worth $1,000.

“The scores at the top end, even the scores in the semifinal, were very close this year,” said Erik Swanby, who chairs the Stampede’s Blacksmiths committee. “And it was really cool to have so many past champions (six) as part of the Stampede’s Centennial.”