Freddy Taylor had no idea what she was getting into when she casually accepted a dinner invitation to a Stampede event 26 years ago. Marv Foote, then-chair of the Stampede’s Promotion committee, introduced a flabbergasted Freddy to the gathering as their newest Promotion committee volunteer. “I couldn’t really say no at that point!” Freddy laughs. 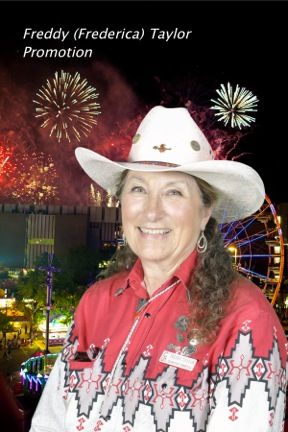 Volunteering for the Stampede was a natural fit for Freddy, who, as a child some 40-odd years earlier, had watched the parade every summer from the balcony of her father’s business, the Grand Hotel in downtown Calgary. “I remember being six years old and telling people that I would be in the Calgary Stampede parade one day,” Freddy recalls. She got her wish in 2001, when she was honoured as the Stampede Promotion committee’s Volunteer of the Year and rode around the parade route in a horse-drawn wagon. “It was truly a childhood dream come true.”

Freddy’s time on the Promotion committee has included hosting hundreds of ‘meet and greet’ events that promote Stampede spirit, making presentations to school children about the Stampede’s history, acting as an events coordinator to organize Stampede entertainment and education at public events, and teaching line dancing. At 75 years young, Freddy still likes to cut a rug. “I plan to be line dancing well past my hundredth birthday,” she says confidently.

In fact, line dancing helped Freddy recover from a stroke she suffered in 1996, paralyzing her left side and impairing her ability to speak. She faced a lengthy convalescence period. Line dancing at Promotion committee events “helped to bring my limbs back into full working order!”

She credits the Stampede Promotion committee with her full recovery, which took about two and a half years. “The patience and care shown to me during that time by my fellow committee members was phenomenal. At the time of my stroke, my role was finding event coordinators. I had to talk on the phone a lot. People showed me so much patience, listened to me, gave me a helping hand – it made all the difference.”

Freddy’s career path followed her father’s, as she made a living in the hospitality industry for almost two decades. She also worked at Theatre Calgary for a number of years, fuelling her passion for the arts. It’s one of the reasons she has recently donated to the Stampede Foundation’s ‘We’re Greatest Together’ Family Campaign, which is raising funds to support the development of an arts-based Youth Campus on Stampede Park.

“The Stampede has been such a pivotal portion of my life. It is a unique collection of so much talent and it’s important to continue to nurture that. The money raised during ‘We’re Greatest Together’ campaign will be used to expand and build more opportunities for young people, who are living in a technical world. I think we need to be more of a hands-on world, and supporting the arts helps us to create more of these hands-on experiences.

“You can enrich your own life immensely by investing in other people.”