CALGARY – As an educational tool, the Cattle Trail has truly blazed a trail.

Last summer, the Calgary Stampede introduced the Cattle Trail as an engaging, interactive presentation of the beef cattle industry — repurposing the former Beef Cattle Showcase, giving it a consumer-facing perspective, and giving thousands of Stampede visitors a close-up look at the industry, all the way from pasture to plate. 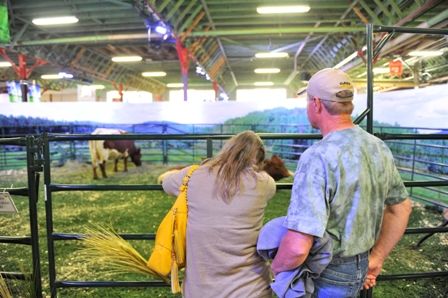 “Frankly, it was a brilliant initiative. We showcased the beef cattle industry to the consumer . . . and the Cattle Trail really does take people right from the prairie through to their plate,” says Bob Park, who chairs the Stampede’s Beef Cattle committee.

“The Cattle Trail is full of demonstration areas and learning opportunities,” adds Park. “It’s an extremely effective way of getting the message across from the beef cattle industry to the folks purchasing their beef at the meat counter.”

The Cattle Trail, which will again be established in the Agriculture Building with a live-animal display, will be open daily during the 2012 Stampede, from Friday, July 6 through Sunday, July 15. With the Calgary Co-op and the Canadian Hereford Association as lead sponsors, the Cattle Trail will lead visitors through the beef cattle industry’s entire production cycle — with stations that focus on the pasture, cow/calf production, herd management, genomics and genetics, auction marts, feedlots, transportation, and the butcher’s shop, recounting each chapter of the beef story.

Throughout the production cycle, industry experts will explain the steps taken to ensure safe food production, environmentally sustainable practices, and animal welfare — from land and water management in the fields, to the science of selective beef cattle breeding in the lab, to recordkeeping and traceability in the herd and the auction mart, to consumer trends in cuts of beef at the Calgary Co-op mock retail store.

With 39 per cent of the Canadian beef herd based in Alberta, the Cattle Trail will share the significant value and impact the beef industry has on Albertans’ personal and economic well-being – and provide an inside look at a complex yet very important industry. New initiatives for 2012 will include live demonstrations of ultrasound testing, and how it can be used to grade live beef cattle, as well as a greater interaction with the Stampede’s International Agriculture Program to facilitate business-to-business contacts between international visitors and representatives of the Canadian beef industry.

“The Cattle Trail truly became a marquee piece within the Agriculture Building during its debut last year,” says Stampede director Dave Sibbald. “It was a fundamental change in focus, with a more consumer-facing perspective, and that worked very successfully. The urban public really did appreciate the ability to ask questions, get close, and become more informed.”

The Canadian Hereford Association will be supplying plenty of beef on the hoof at the Cattle Trail exhibit in honour of a very special year.

“Because it’s the 100th anniversary of the Calgary Stampede, and because the (quadrennial) World Hereford Conference is being held on the last three days of Stampede, we wanted to make sure we had a strong profile with the Cattle Trail, because we think it’s a very good concept and program,” says Gordon Stephenson, general manager of the Canadian Hereford Association. “We’ll have plenty of signage, and at least for the last four days of Stampede — if not for the entire show — there’ll be a very high profile of Hereford cattle within the Cattle Trail displays.”

The Calgary Co-op meat counter will feature a meat-cutting expert providing information on various meat cuts, as well as downloadable recipes and nutrition tips. Visitors will also be able to enter a draw to win a side of beef from Calgary Co-op.

“We believe in the importance of educating the public on how beef gets to their plates, and offering an understanding of how the beef industry is providing a sustainable resource to customers,” says Calgary Co-op events and promotions manager Sarah Boutron.

The Cattle Trail features plenty of interaction. Kids will be able to take home seed packs of wild flowers, an ear tag with their name on it, and more.