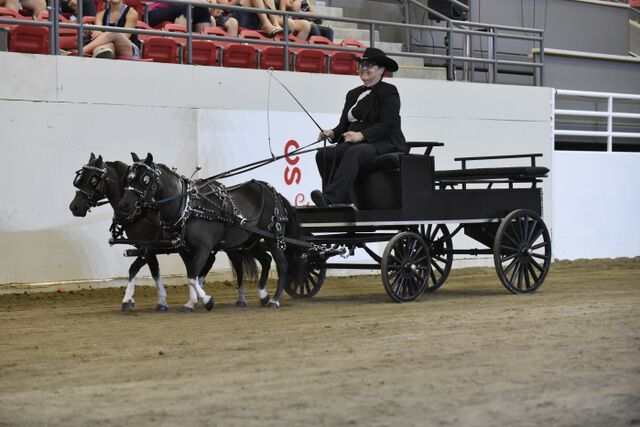 Calgary – Since 1992, the culminating event in the Canadian National Miniature Horse Show at the Calgary Stampede has been the competition for the Lord Sterling Cup. After this year, of the 24 winner’s plaques on the handsome silver trophy, 16 will have the name of the Circle J Ranch engraved on them. Last year’s winning team, known as Duke and Zach, were driven to victory by Charlene Gale again this year.

“They did very well today,” Gale said. “I did a few things wrong. I would find myself in very poor form and they were still doing what they were supposed to do. They definitely carried me. They’re good boys.” The two horses on her winning team are half-brothers, Gale said, and are definitely not youngsters. Duke is 16 and Zach is 20. “They have more experience. They’ve been around a lot and they’ve been here a lot.”

Miniature Horses are a separate breed, not tiny versions of other breeds.  The little beauties are descended from the pit ponies that were used in mines, deliberately bred to be small to fit into the narrow confines of the mines of a couple of centuries ago.  Today’s Miniatures are somewhat different from their ancestor, since the original pit ponies were a much stockier horse, almost like a miniature heavy horse.  Modern-day Miniature Horses are shown in different ways, some are led around obstacles and over jumps, while others pull scale carts and wagons.

In the Lord Sterling Cup competition, teams must pull a four-wheeled wagon, changing their pace on command, backing up the wagon and swinging from side to side before driving in a figure eight pattern. The required routine is intended to prove a team has the skills to perform tasks that would be necessary for a working draft team.

“The dirt is very heavy in here and the wagons are heavy,” Gale pointed out. “I train them on grass in a pasture. It was a tough workout for them. It’s never a foregone conclusion. It’s a challenge for me to keep calm and do it right, so they can do it right.”