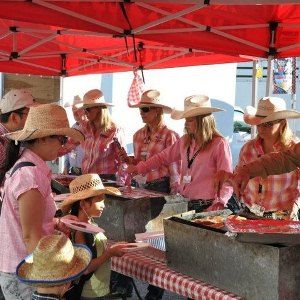 Before the Queens’ Alumni was a formal Stampede committee, they established their commitment to helping special needs children by hosting a pancake breakfast called the“Stampede Special,” in 1979.  Renamed many years later as Giddy-Up Grits, this invite-only event has been hosted on Stampede Park annually for 33 years!

Between the appointments, expenses and requirements often unique to raising a special needs child, many families would not be able to visit the Calgary Stampede if not for Giddy-Up Grits.

Hosted in conjunction with Maxim Power Corp., many groups and volunteers work together to make Giddy-Up Grits possible year after year. Families are offered free admission to Stampede Park before 9:30 a.m., a Stampede breakfast and many other activities including a petting zoo, roving musicians, entertainment and free Kids’ Midway rides courtesy of North American Midway Entertainment. The minimal crowds are perfect for the children who don’t need to wait in line for their favourite rides or games.

As one happy mother said, “My daughter gets overloaded with large crowds and loud noises, so something on a smaller scale like this still gives her the feel of the Stampede. She got to enjoy some of the rides without waiting in line, which she’s not great at, and we got to enjoy a beautiful day with the whole family.”

The 2012 Grits welcomed over 450 enthusiastic attendees, many who come with their families year after year and excitedly look forward to the Giddy-Up events. The Promotions committee greeters met the families in the morning with welcome brand stamps, while the Caravan committee fired up their stoves so that the pancake breakfast could begin right on time.

North American Midway Entertainment opened up the Kids’ Midway for two hours and Debbie Lee and her Country Critters joined in the fun with Harry the Horse and the mascots of the Downtown Attractions committee. Clowns, balloon artists, face painters and a family photo booth added to the excitement.

The Calgary Stampede Queen and Princesses and the Indian Princess were crowd favourites, accompanied by the many visiting rodeo royalty from Canada, Australia and the United States. They posed for pictures and signed autographs for the young fans.

The Queens’ Alumni mission of contributing to the special needs community while promoting the Stampede’s spirit and values comes to life each Stampede at the
Giddy-Up Grits. 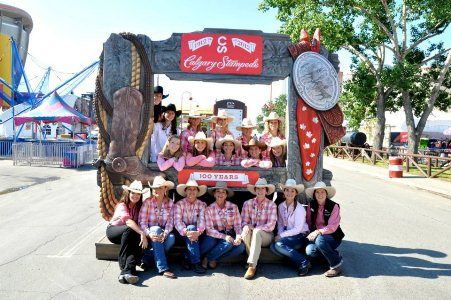