The Global Petroleum Show, an event that broke attendance records last year by drawing more than 63,000 local and international visitors to Stampede Park, will now be an annual event. 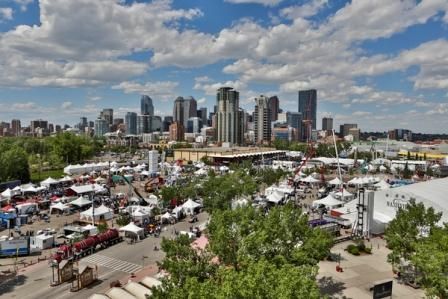 One of the largest energy industry events in the world, and the second largest event held at Stampede Park, the Global Petroleum Show announced last week it is shifting from a biennial timetable to an annual one in 2014 in order to respond to attendee and exhibitor demand for access to emerging markets, the latest technologies and collaboration with industry experts.

“The Global Petroleum Show is a wonderful opportunity for us to reach a worldwide audience, showcasing the Stampede brand and highlighting all that we have to offer,” says Amanda Whitney, Calgary Stampede event manager. “Hosting the event more frequently than before will help the Calgary Stampede achieve our strategic plan through increased revenues, which allow us to develop new programs and enhance Park facilities.”

Show attendees experience a taste of the Stampede during a rodeo hosted specifically for them. This rodeo provides the Stampede with an opportunity to share our unique experiences with a global audience and to provide attendees with a one-of-a-kind western event.

The show, which has been held in Calgary every two years since 1968, also has a significant financial impact on the city, estimated to be about $70 million per event. As a result of the show, nearly $9 billion worth of business transactions are typically conducted between local and international companies.

More than 2,000 exhibitors set up in more than 700,000 square feet of space at Stampede Park, with events taking place in BMO Centre, the Big Four Building, Corral, Boyce Theatre, Palomino Ballroom and Rotary House. Parking lots are used for an oilfield technology and equipment showcase.

With the move to an annual schedule, the Global Petroleum Show will replace the Gas and Oil Expo, a smaller event held on alternate years at Stampede Park.

The Global Petroleum Show by the numbers:

·         8.9 billion: dollars in business transactions conducted between local and international companies as a result of the show