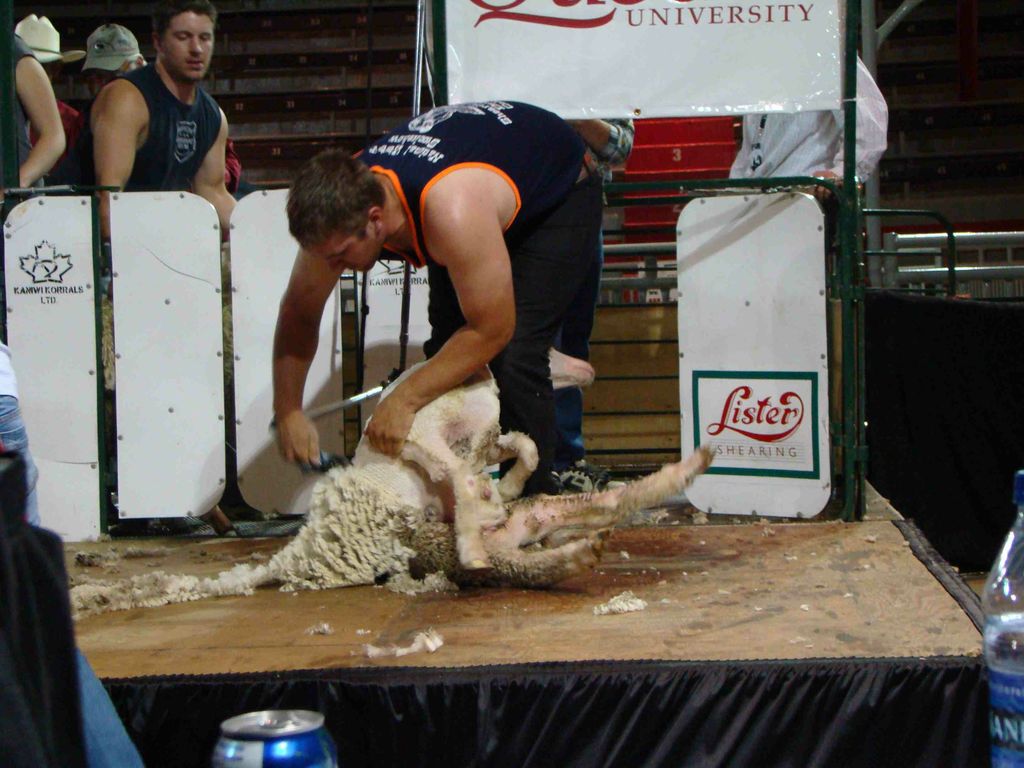 “The biggest thing is just to keep busy shearing. There’s really no exercise you can do that matches the motions of shearing,” notes Tony Troendle of Bison, S.D. “You’re using your upper body — your arms, your shoulders. Your lower back, obviously. And your legs.

“There’s a proper way to shear sheep. And if you do it properly, like it’s meant to be done, then it’s not as hard on your body. I can typically shear eight hours a day, and not feel it . . . too much. Not unless they’re really big sheep, or mean. On average, it’s just like a day at the office for me.”

Troendle’s office? The great plains of the Dakotas and Wyoming, the rolling hills of Idaho, Montana, and Minnesota, the meadows of Australia and New Zealand.

The 26-year-old South Dakotan is quite possibly the continent’s best clipper clutcher who hasn’t yet won the annual North American Sheep Shearing Challenge at the Calgary Stampede. After finishing as the runner-up in each of the past two summers, he’ll be taking a seventh consecutive crack at the Stampede title this year, as the continent’s premier competition holds court in the Agriculture Building on Friday, July 6 and Saturday, July 7.

Like many in the profession, Troendle ended up with an accidental career in trimming those well-insulated ruminants. At the age of 18, he tagged along with a shearing crew in South Dakota, found he could master the technique, and . . . the rest is ovine hairstylist history. Nowadays, Troendle will shear 35,000 sheep in a year — and his single-day record is 368, recorded last December while in New Zealand.

Since he made his last appearance at the Stampede, Troendle has expanded his business considerably. While he still traverses the Great Plains states of the U.S. from January through June, he also began plying his trade in Australia and New Zealand last fall, from August through December — and he’ll be repeating those seasonal plans for the foreseeable future.

While beef is agricultural king in North America, it’s a whole different world in Oz, where Troendle sharpened his shearing talents on Merinos not far from Adelaide, in the state of South Australia.

“The numbers over there are insane. I worked on a crew of 26 shearers, and there were two other crews in town — one with about 30, the other with 15 or so,” he recalls. “So you’ve got 60 shearers shearing two or three hundred sheep a day. None of us ever went more than an hour, hour-and-a-half away from town. It’s just mind-boggling, the amount of sheep that are in such a dense area.”

The 16th annual North American Sheep Shearing Challenge will see the world’s top shearers in the open and intermediate classes take part in four preliminary rounds on Friday, July 6 and Saturday, July 7, with Hamish Bramley of Kaeo, New Zealand the defending champion in open and Chris Schuldt of Chinook, Mont., the defending titleist in intermediate. The Stampede competition will also feature three preliminary rounds of an international team shearing challenge. Championship finals in the Agriculture Building begin on Saturday, July 7 at 5 p.m., kicking off with the international team competition and following with the intermediate and open categories, in that order.

The Stampede’s shearing challenge is both a timed and judged competition, with one point added for each 20 seconds in time. Judges also assess points for second passes with clippers, and later examine the animals for remaining ridges and tufts of wool and inadvertent small cuts or nicks in the skin. The overall champion in the open class takes home $2,000 and a Limited Edition Calgary Stampede Centennial Commemorative Pendleton Wool Blanket, while the open runner-up takes home $1,000. For the fourth consecutive year, the Stampede will be adding its own twist to the competition, with shearers facing off two at a time trying to beat each other and the clock.

Troendle enjoyed his finest year as a professional shearer, so far, in 2010 — when he won the professional division of the National Western Stock Show in Denver, the Black Hills Stock Show in Rapid City, S.D., and the Miles City Bucking Horse Sale competition at Miles City, Mont., earning a coveted trifecta award for that American triple-crown sweep. He’s still looking for that Stampede buckle — although his Southern Hemisphere experience last winter might have given him the edge he needs. “I haven’t really had much training on cross-bred sheep, which is what we shear in Calgary. But that’s what I was doing in New Zealand this past year,” remarks Troendle. “You shear them a lot different than you do fine-wool sheep — and that should help me a lot. I’m a lot more proficient at it now.”