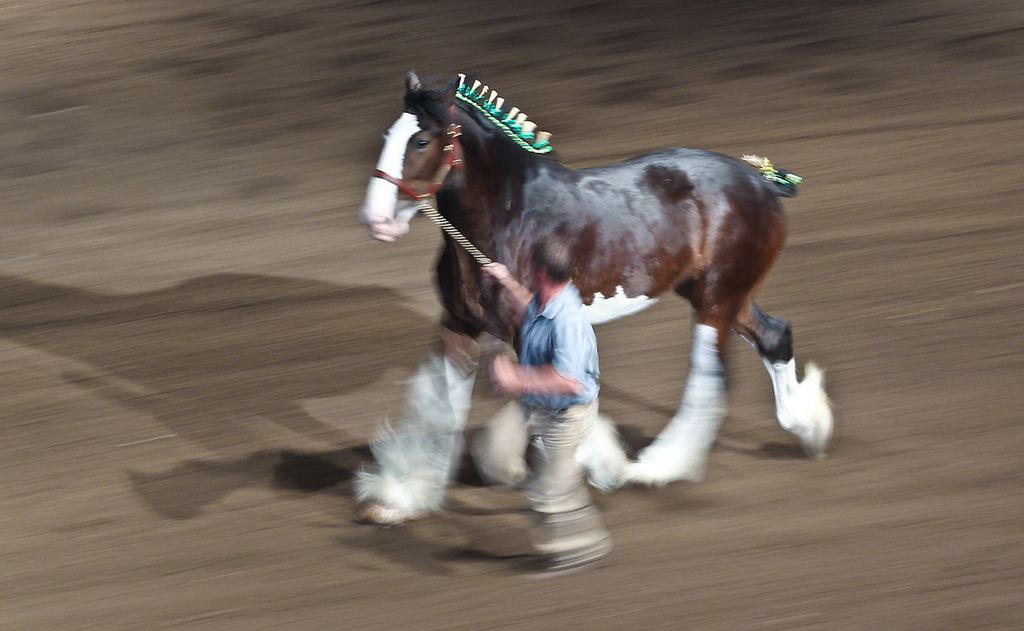 Calgary –  Heavy horse events provide guests a look at the big breeds over the weekend. On Saturday, July 4, at 7pm the Scotiabank Saddledome will be filled with the glorious music of the Calgary Philharmonic Orchestra while, on the floor, several heavy horse performance classes will be going through their paces in one of the Stampede’s ‘Must-See’ events.

On Sunday, July 5 at 11 a.m., is the annual All Breeds World Championship Six-Horse Hitch Competition. A dozen of the best six-horse teams on the continent, from as far away as Ontario and Oklahoma, will strut their stuff while the orchestra plays. Immaculately-groomed and intensively-trained, the big horses enter the Saddledome arena at a fast trot, stepping high with their harness sparkling. Atop the beautifully-appointed wagons, the smartly-dressed teamsters then slow their charges to a walk and take them up to another fast trot before reversing the course and finally lining up for the judges.

The Calgary Stampede traces its heritage back to 1886, when a group of pioneers who believed in the future of the settlement at the junction of the Bow and Elbow Rivers decided to put on an exhibition. The Heavy Horse Show - one of the features 129 years ago - is still a feature of today’s Stampede.

“We’re probably the longest-lasting event in Western Canada,” says Lorne Hammer, chair of the Heavy Horse committee. Involved with the Heavy Horse Show for more than ten years, Hammer says he was attracted to the event for the same reason as many of the volunteers that make the show a success: “It’s the love of the heavy horses. The breeds are so different, yet they’re alike in the way they act in the ring.”

Breeds are a big deal at the Heavy Horse Show. The four main types of heavy horse are Belgians, Percherons, Clydesdales and Shires.  According to Hammer, social media has expanded the audience for the Stampede’s Heavy Horse Show and a worldwide audience, including international horse breeders, now pays close attention to the results

“This is one of the largest and best heavy horse shows in North America,” Hammer says. “The judges are hand-picked.” This year two Canadians and one American, all noteworthy breeders and breed experts, will take on the difficult task of choosing the Stampede Champion.

The All Breeds World Championship Six-Horse Hitch Competition isn’t the end of it, though. “We have two climaxes to our show,” Hammer points out. Over the first weekend of Stampede in the Agrium Western Event Centre, the 190 heavy horses entered in the Heavy Horse Show are judged in 118 classes, competing to be the best of their breed – the Supreme Champions.