CALGARY – Cowboys, notes Craig Cameron, “ride to the sound of the guns.” 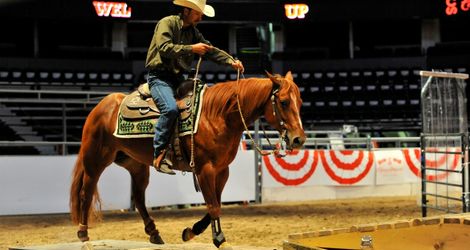 Since the Calgary Stampede Cowboy Up Challenge was established in 2010, it has earned a reputation for some the most challenging courses in Extreme Cowboy Racing – and during this year’s championship final on Monday afternoon, course organizers installed a dizzying degree of difficulty. But Jim Anderson of Strathmore, Alta., and his mount Picasmokenlittlelena were more than ready for the challenge at the Scotiabank Saddledome . . . and their fortitude was repaid with some rather extreme rewards.

“The course was tough, but I knew my mare could handle each obstacle really well. So I wanted to push the envelope and really make a run,” said Anderson, the first local competitor to snare Cowboy Up Challenge glory in the event’s three-year history. “I didn’t want to give them judges any option. She felt great in there . . . I kept pushin’ her, and she just kept givin’. She’s just a great horse.”

A timed and judged event, Extreme Cowboy Racing demands both horsemanship and speed, challenging both horse and rider with an obstacle course that tests the bond and trust level between the two – and test it did on Monday.

Horse-and-rider teams negotiated water crossings, narrow bridges, and miniature chuckwagons pulled by miniature horses. Riders were required to carry a bucket of water, bareback, while their equine companions negotiated two moving bridges and a minefield of deadfall. Riders did their best to stick a spear through three separate rings on pedestals while on the move, ramming it into a bull’s-eye – and they stood in the saddle to ring a dinner bell that hung on a high laundry line. On top of all that, their mounts negotiated the spokes of a giant wagon wheel laid on its side, while a musician played live fiddle music standing on the hub.

“Today, the course got tougher and the competitors got tougher,” said Cameron, who again announced all three days of the Cowboy Up Challenge competition. “There wasn’t a competitor here that let us down. These cowboys and cowgals are true champions . . . (victory) could have gone to anybody. But Jim Anderson definitely deserved it this year.

“He was spot-on. Right on the money. He had a real soft touch. Every stop was a sliding stop,” added Cameron. “Again, he was a really precise rider – with speed, with control.”

Defending champion William (Runt) Rageth of Harris, Mo., and his grade horse Burdock finished about six points back of Anderson – earning 125.385 points, compared to their Canadian counterparts’ 131.765 – for the reserve championship. Rageth collects a runner-up cheque for $4,000, as well as a Stampede buckle.

Laurie Shelton of Dripping Springs, Texas, and Ima Little Tequila were third, earning $2,400, after judges awarded them 123.24 points. Robin Bond of Vista, Calif., the 2010 reserve champ, placed fourth aboard Jose’s Perfection, collecting $1,800 after a 117.55-point ride. And Glenn Stewart of Baldonnel, B.C., and Genuine Jet Smooth, who won the inaugural Cowboy Up Challenge together, teamed up for fifth place and a $1,200 payday following their 117.46-point performance.

The top nine teams from an original field of 13 advanced to Monday’s final via aggregate points totals accumulated from two rounds of preliminaries on Saturday and Sunday. Chris Redden of Ravenwood, Mo., and Wrangler Baron Bar rounded out the final roster as a wild-card entry.

Anderson ends up stuffing $8,000 in his Wranglers, after earning $1,000 for winning Sunday’s preliminary round. Monday’s ride apparently marked his swan song aboard Picasmokenlittlelena, owned by Rob and Marilyn Wedel of Calgary.

“The owner is going to show her now, in the reining as well as the cowboy challenges. She’s made of heart and soul. She’s not a big mare, but she’s got a big heart, very kind. Good minded,” he said. “We actually bred and raised that mare, and trained her. It makes victory that much sweeter.”