CALGARY – Out on the wide-open range, there are Ferraris and half-tons, Jeeps and Porsches. Four decades ago, Gus McCollister chose the Cadillac of the equine world — and she’s never looked back since that initial test drive.

McCollister was an exhibitor at the Calgary Stampede’s very first Horse Haven display, which celebrates its 35th anniversary at the 2012 edition of The Greatest Outdoor Show on Earth. And she’s still got nothing but praise for her beloved breed — the Peruvian Paso, touted as the smoothest riding horse in the world. 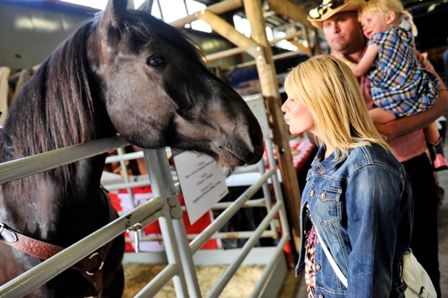 “It’s simple — they’re great riding horses,” says McCollister, a founding member of the Peruvian Horse Association of Canada who bred and sold Peruvian Pasos for many years at her Prairie Diamond farm near Lyalta, Alta. “They don’t jump. They don’t cut cattle like a Quarter Horse. They don’t run like a Morgan. People who do roping need the trotting horse. And as far as pulling a wagon . . . well, you could teach a dog to pull a wagon.

“But they are gaited. And if you want to get your horse out on Sunday and go for a ride, which most people do, these are the ones to have. They’re so smooth . . . you’re not all beat up when you get off.”

Horse Haven, presented by TAQA, will be saddling up for another 10 days during this year’s Stampede, opening the gates of its Western setting from 11 a.m. to 8 p.m., from Friday, July 6 through Sunday, July 15, in the northwest corner of the Agriculture Building.

This annual light-horse love-in will feature presentations, demonstrations, and plenty of horse sense as breeders extol the virtues of their equine companions and promote the breed they love. These light horse breeds can be seen in action daily during demonstrations in the Northern Lights Arena and the Big Top.

“Horse Haven gives people a chance to learn about different breeds of light horse, and why they’re popular in certain segments of society,” says Kristin Hack, a vice-chair of the Stampede’s Light Horse committee. “It also gives people the opportunity to interact with and touch a real-live horse. The focus is educational and interactive.”

McCollister, who formerly chaired the Stampede’s Light Horse committee, notes that the Peruvian Paso has descended from horses brought to South America by the Spanish in the 16th century — the Andalusian, the Friesian, the Spanish Jennet.

“The people in Peru developed this horse because their (sugar cane) plantations were miles and miles apart, and they wanted to go from one to another without being all sore and stiff,” says McCollister.

“I read an article written by a South American man, a fair while ago, and he said, ‘These horses are so smooth that even a woman can ride one,’ ” she adds with a derisive laugh. “I bought my first Peruvian Paso out of the United States in 1970, and I was impressed. They’re a great riding horse — even for a woman!”

Horse Haven, presented by TAQA, has expanded its partnership with the Alberta Equestrian Federation for this year’s Stampede, meaning there’ll be more educational presentations for Stampede visitors throughout the 10-day show.

Horse Haven will offer numerous interactive opportunities, with horsemanship displays and demonstrations scheduled daily. Representatives of the University of Calgary’s Faculty of Veterinary Medicine, as well as various 4-H Club chapters, will also be on hand to offer their expertise, while breed- and activity-specific demonstrations will be staged in the Northern Lights Arena. “There’ll be sessions on topics such as how to groom a horse, preparing a horse to ride — basic horse knowledge, essentially,” says Hack.

Equestrian vaulting, a magnetic light-horse demonstration, will take over the Big Top on Monday, July 9 at 1:50 and 7 p.m., and Tuesday, July 10 at 11:30 a.m. A combination of gymnastics and dance on horseback, vaulting teaches children and adults to move in harmony with a horse, as well as improving balance, flexibility, strength, and teamwork skills. And kids will once again enjoy the free, collectible Horse Haven Activity Book, with coloring, puzzles, and other exercises.