CALGARY – The informal catchphrase is B2B. And for international agriculture executives hoping to swap business cards, this is quite clearly the place 2B. 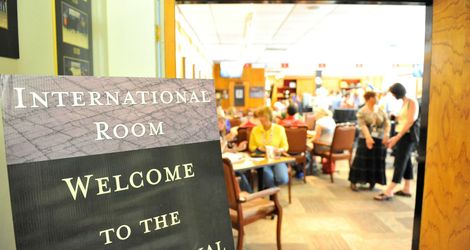 Since 2009, the Calgary Stampede’s International Agriculture Committee (IAC) has actively promoted business networking opportunities in the Albertan and Canadian agri-food industries — while also offering that famous Western hospitality — for globetrotting travellers who pass through the doors of the International Room. And during the 2012 Stampede, the face-to-face B2B network was abuzz.

“We couldn’t be more pleased. In the past year, our committee and its programs have completed a transition to truly promoting the Calgary Stampede, welcoming the world’s agriculture representatives, and facilitating business,” says Ted Haney, who chairs the Stampede’s International Agriculture committee.

“There will be more corporate engagement, at a higher and more interesting level. There will be more outreach for international guests, to encourage visits to the Stampede and our International Room. Even with the successes of 2012, we are not where we want to be — yet — but we see this as a new beginning. And that’s very exciting.”

During the Centennial edition of the Calgary Stampede, a total of 2,604 guests from 60 countries visited the International Room, in the Agriculture Building, to wet their whistles and enjoy live Western music. As usual, there were global visitors from A (Argentina) to Z (Zimbabwe) and everywhere in between — Iceland, Denmark, Panama, Uruguay, Swaziland, Kazakhstan, and Tunisia, just to name a few.

The number of visitors, and countries represented, were the most in recent memory. So, too, were the number of requests made for business follow-up — 321, nearly doubling last year’s previous high of 172 — in such diverse agricultural sectors as livestock and farm machinery, grains and processed food, oilseeds and meats and construction. IAC members are currently following up on those requests by connecting visitors with the appropriate federal or provincial trade association.

Those encouraging numbers surely got a boost from the overall flood of Centennial-year visitors — just over 1.4 million — that set a new cumulative Stampede attendance record, as well as excellent weather during the show. But other factors were also at play, highlighted by the International Agriculture Committee’s annual reception on Wednesday, July 11 — a networking extravaganza that drew approximately 300 guests through the evening at Rotary House.

“It is the premier agricultural networking event of the summer for Canadian and international, government and industry leaders. Having (Alberta) Premier Alison Redford there, as well as Alberta Agriculture and Rural Development Minister Verlyn Olson and federal Agriculture and Agri-Food Minister Gerry Ritz, for the reception — that, to us, was validation,” says Haney. “The demand to attend is massive. People come for the face time . . . to meet the owner of a feedlot, the GM of a major processing operation, a specific company executive, or a political leader. Important meetings are held, whether they last 30 seconds or 30 minutes.”

Also pivotal to that surge in business linking requests was the geographical layout of this year’s Cattle Trail exhibit, where the International Agriculture committee’s main outreach booth is stationed. The Cattle Trail itself was a runaway success this year, with an estimated 112,000 visitors. And in 2012, every one of those visitors filed past the IAC booth, which was staffed by an IAC committee member as well as representatives of Alberta Agriculture and Rural Development and the Alberta Livestock and Meat Agency to accelerate the business linking process. More than half of this year’s 321 business linking requests were generated at the IAC booth.

“Guest used pins on a world map to indicate their homes,” says Haney. “And that first Sunday of Stampede, we had 92 countries of the world with a pin — that’s nearly half the countries in the world.”

The International Agriculture Committee also used a new previous-guest contact system, designed to increase word-of-mouth exposure, to great effect in 2012. Previous guests from the past five years were contacted via e-mail three times in the 10 months leading up to the 2012 Stampede with quick, unobtrusive messages regarding the International Agriculture Program. “People showed up understanding that we were here, looking for us, and expecting to be connected,” says Haney.

Hospitality, of course, has always been a mainstay of the International Agriculture Committee, and Haney says this year’s atmosphere in the International Room featured a friendly, convivial vibe. “We’re expanding, quite dramatically, our focus on facilitating business. But none of that comes at the expense of hospitality or providing a very warm Western welcome,” he says. “Our international guests may be retired, or students, or even businesspeople here purely for pleasure. Our focus on business has not in any way interfered with our ability to be warm and welcoming Western hosts.”

The International Agriculture Committee also publishes the International Agriculture Profile, a glossy annual publication with a magazine format, to help deliver its message by featuring trends and developments in Canadian agriculture, especially in southern Alberta. This year, the 44-page magazine saw its print run boosted to 6,500 copies from 5,000 — and in addition to its distribution to international guests, approximately 2,000 copies were circulated to Canadian embassies, high commissions, consulates, and trade offices around the world by Foreign Affairs and International Trade Canada.

Work will soon begin on one of the most significant infrastructure projects in Stampede history — the Agrium Western Event Centre, which will be the largest facility of its kind in Canada upon completion. For details and artistic renderings of this magnificent 150,000-square-foot agriculture showcase and competition venue, scheduled for completion in 2014, visit http://corporate.calgarystampede.com/about/park-development/agrium-western-event-centre/