CALGARY – To a large degree, the Calgary Stampede’s Centennial will be about memories and reminiscences. The Stampede’s International Youth Livestock committee is using the Stampede’s 100th birthday bash to make sure the agricultural torch is held prouder and higher than ever before. 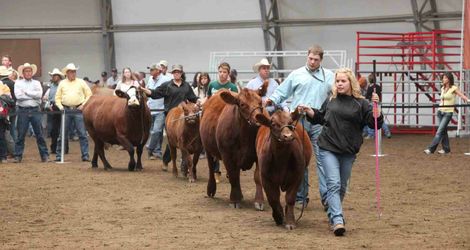 From a significant boost in scholarship money to a special night of recognition, the Stampede’s International Youth Livestock program — fuelled by sponsors Tervita, Bayer CropScience, ConocoPhillips, Enbridge, WA Ranches, the Alberta 4-H Foundation, Ted and Enid Jansen, and the Calgary Stampede Foundation — will be making an extra effort during the 2012 Calgary Stampede to recognize the commitment, dedication, and ingenuity shown by the future leading lights of the agriculture industry.

“The legacy that this (International Youth Livestock) program has provided is unbelievable,” says Tracy Lundago, executive advisor to the Stampede’s International Youth Livestock committee. “We’ve had kids go on to gain access to domestic and international (post-secondary) scholarship opportunities in elite fields such as veterinary medicine and agribusiness. We’ve had others involved in mentoring programs with industry leaders in commercial/retail pharmaceutical and livestock nutrition.

“We hope that this very special Centennial year will mark a milestone — and it’ll be able to take our program that much further into the future.”

For starters, the Stampede has nearly doubled the amount of International Youth Livestock scholarship money, as well as the number of scholarship recipients aged nine through 20, at the conclusion of the Summer Synergy show — a week-long collaboration between the Stampede and the Olds Agricultural Society that wraps up on Stampede Park on Saturday, July 14.

About 350 competitors from across Western Canada, with about 600 head of livestock in tow, are expected to take part in Summer Synergy this year by exhibiting animals in sheep, dairy, or beef species classes. Following International Youth Livestock scholarship interviews July 14 on Stampede Park, 55 future stars of agriculture will be awarded more than $80,000 in scholarships.

Also on July 14, under the Big Top, IYL Supreme Championships — in purebred beef, commercial beef, dairy, and sheep classes — will be awarded during the 30th annual UFA Steer Classic. In order to vie for an IYL Supreme Championship, teenaged competitors will need to have already won a red ribbon in the lead-up to Stampede — either at Summer Synergy, the Provincial 4-H Sheep Show, the Provincial 4-H Beef Heifer Show, or the Provincial 4-H Dairy Show, all being held at Olds in July. “These will be the very best exhibitors from a group showing literally hundreds of head of livestock,” notes Lundago. “They’ll already have been the best of their respective (class) just to make it to the Supreme show. The bar is very high, and the quality is second to none.”

All 55 International Youth Livestock scholarship recipients will be recognized this year by getting called up on stage during the evening Grandstand Show on July 14.

Also on the evening of Saturday, July 14, at the BMO Centre’s Arabian Room, International Youth Livestock scholarship winners and Supreme Champions, along with their families, will be toasted during a gala reception entitled Stars of Agriculture. Also on hand will be sponsors and special Stampede and industry dignitaries, as well as some of the more successful and influential International Youth Livestock alumni who’ve gone on to considerable success — and will recount their stories with the audience.

“We want to make sure we properly salute the achievements of young people during this very special Centennial year,” says Lundago. “Anyone who’s a champion during a Centennial year will pretty clearly be part of history.”