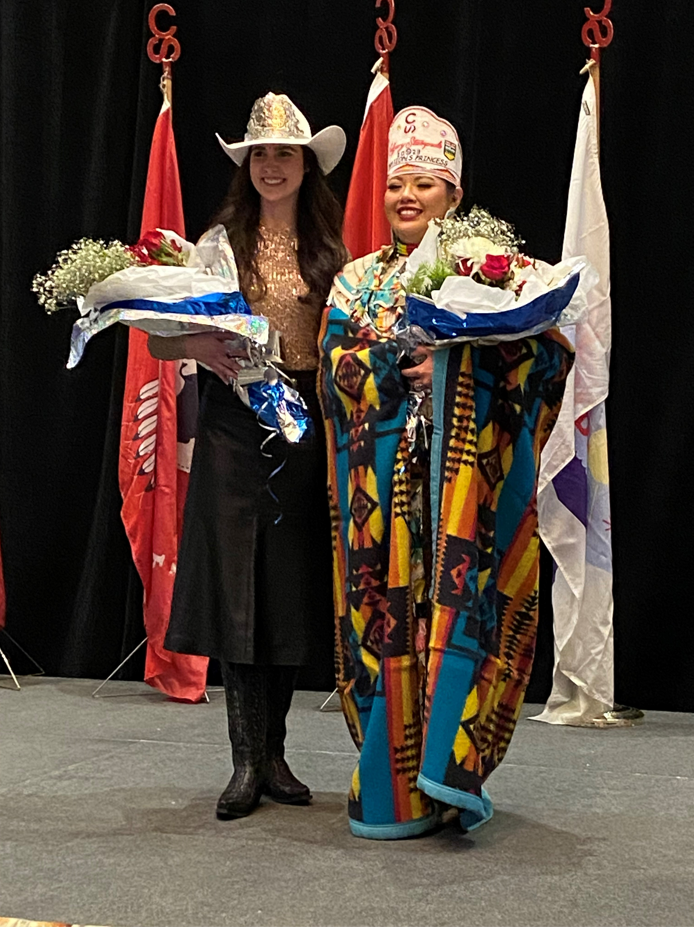 Sarah, a 22-year-old from Springbank, Alberta, showcased her talents and passion throughout the competition, shining bright amongst an incredibly strong group of competitors. She is currently pursuing a Bachelor of Science in Geophysics and Geology and working as a math and science Tutor. Growing up, Sarah was a dedicated Irish dancer, competing up to the international level. She began riding horses as a young girl and has experience in both Western and English disciplines. In her spare time, she enjoys rock climbing, sewing, riding, and various activities in the mountains. Sarah believes that expressing your genuine self will always lead you down the right path and hopes to share this with others during her reign.

“The Royalty Committee is beyond excited for Sarah to start her reign as the 2023 Calgary Stampede Princess. Through her horsemanship, public speaking, and interpersonal skills, she left a lasting impression on the judges and everyone she met during the competition,” says Janelle Fortmuller, Chair, Calgary Stampede Royalty Committee. “I am confident that her passion for the Stampede and her enthusiasm for the role will make her an incredible representative for the Calgary Stampede.”

Alayiah is a 24-year-old Blackfoot woman and a proud member of Siksika Nation. Her Blackfoot name is Massamahkoyinnimaki, which roughly translates to “Long Time Thunder Pipe Woman.” Alayiah was brought up as both a Traditional and Jingle Dress Dancer in Elbow River Camp and possesses a deep love and respect for the western culture that both her grandparents loved so much. Alayiah has always been an avid supporter of not only Blackfoot culture but also the rich Western culture that surrounds Mohkinstsis (Calgary). She has made it her mission to not only teach others about the vision Guy Weadick had for The Greatest Outdoor Show on Earth but to encourage every young girl, woman and person within Treaty 7 and Calgary that with a strong dream, hard work and determination, you can achieve anything you put your mind to.

“It is such an exciting time as we crown Alayiah the 2023 Calgary Stampede First Nations Princess,” says Terri Jo Lennox, Chair, First Nations Events Committee. “As an ambassador of Elbow River Camp and the Calgary Stampede, she will have hundreds of opportunities to connect with the community and share her culture and traditions with the world.”

Together, Sarah Lambros and Alayiah Wolf Child will attend hundreds of events as 2023 Calgary Stampede Royalty, sharing and celebrating the Stampede’s western heritage, cultures and community spirit as ambassadors of the organization.

Both Sarah and Alayiah will officially begin their reigns on January 1, 2023, taking the reins from 2022 Stampede Princess, Jenna Peters, and 2022 First Nations Princess, Sikapinakii Low Horn. The Stampede would like to recognize and thank Jenna and Sikapinakii for their tremendous ambassadorship of the organization and are fortunate to have such passionate and engaging ambassadors.

The Calgary Stampede celebrates the people, the animals, the land, the traditions and the values that make up the unique spirit of the west. The Calgary Stampede contributes to the quality of life in Calgary and southern Alberta through our world-renowned Stampede, year-round facilities, western events and several youth and agriculture programs. Exemplifying the theme, We’re Greatest Together, we are a volunteer-supported, not-for-profit community organization that preserves and celebrates our western heritage, cultures and community spirit. All revenue is reinvested into Calgary Stampede programs and facilities.