CALGARY – Les Jack has come as close as anyone to mass-producing Calgary Stampede Cutting Horse Futurity championships over the past decade. Now, he’s gone and bought himself The Factory.

Jack teamed up with Instantly Catty for a 219 on Sunday afternoon at the Stampede Corral — good enough to win the Non-Pro Futurity class at the 32nd annual Calgary Stampede Cutting Horse Futurity, presented by Wrangler. 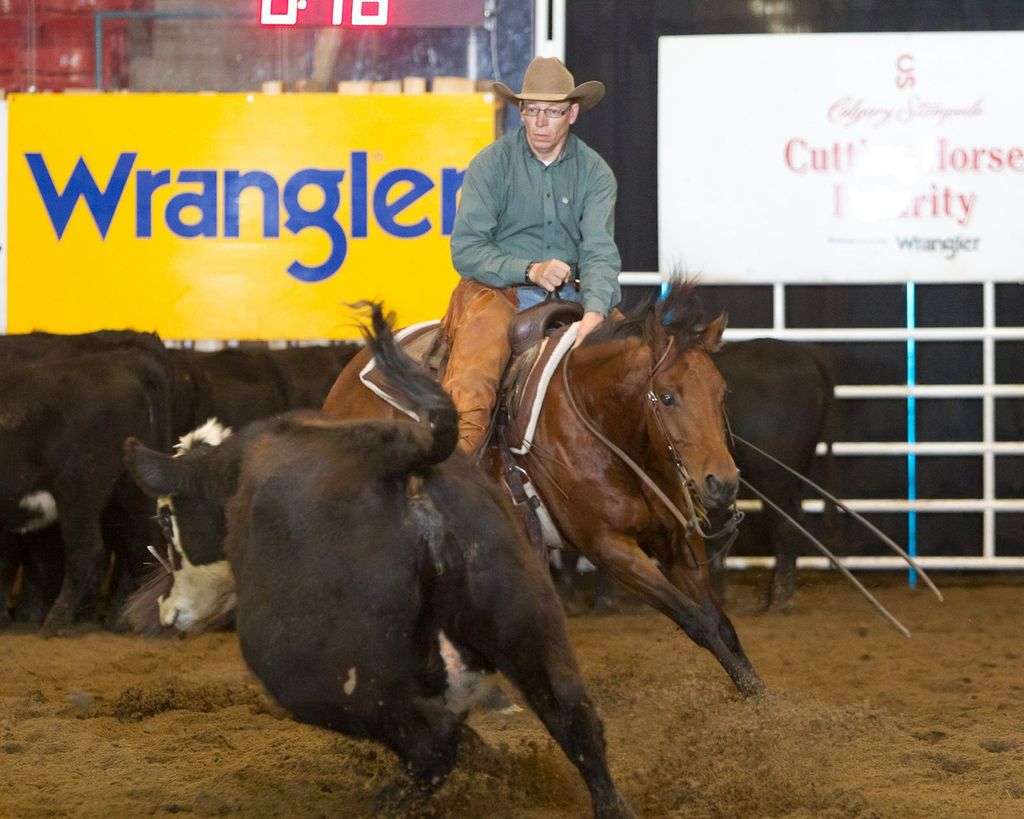 That makes three Non-Pro Futurity titles in four years for the rancher and construction company owner from Rocanville, Sask. But it seems that Jack isn’t merely satisfied with his apparent talent for scouting, buying, and showing fantastic three-year-old cutting horses.

“Instantly Catty is out of the same mare (Biscas Instant Jewel) as all the age-event horses I’m showing. I bought her from Top Notch Performance Horses in Edmonton, who raised all three of the ones I’m showing — a three-year-old, a four-year-old, and a six-year-old,” said Jack. “They’re all great horses. In fact, I liked the three of them so much that we bought the mother — who we call The Factory — from Top Notch last fall.

“Now, we’ve got a two-year-old and a yearling out of that mare. That’s kind of exciting.”

The Stampede’s Cutting Horse Futurity wrapped up its five-day run at the Stampede Corral on Sunday with finals in the Non-Pro rider classes. “Canada’s Forth Worth,” as it was labeled this week by competitors Grant and Gale Aykroyd of Wainwright, Alta., the Stampede Futurity is the premier cutting event in Canada — with this year’s edition featuring 267 entries and $318,000 in prize money.

All four of Sunday’s finals — Futurity for three-year-old horses, Derby for four-year-olds, Classic/Challenge for five- and six-year-olds, and 7-Up for horses aged seven or older — had a special incentive this year, with the winners receiving the final four Centennial Trophy Saddles commissioned in honour of the Stampede’s 100-year birthday bash. In all, 25 trophy saddles were awarded this year to winners of Western Performance Horse events during the Stampede’s Centennial edition in July, as well as class champions at the fall Stampede Futurity.

Non-Pro riders make no part of their income training cutting horses, and can only compete on horses owned by themselves or immediate family members. Jack seems to have the Non-Pro fall formula down to a science — because his win in Sunday’s six-team final with Instantly Catty, worth $7,768.29, was his ninth career championship buckle at the Stampede Futurity dating back to 1998.

“All of the horses out of Biscas Instant Jewel have similar characteristics. They’ve got a lot of smarts on the cow, a lot of draw, with trainability and a real wish to please, if that makes sense. They’re really trying to help you,” said Jack.

“Today, she had a pretty tough run for a three-year-old. But she hung in there and never showed any signs of being a three-year-old. She had to run, and stick it, and be really accurate on her third cow, which was really tough.”

Lund and Youll Miss Me had consistently been the best of the Non-Pro Derby field through the week, winning the first round with a 218 and coming within a half-point of the second-round lead at 216.5. During Sunday’s eight-team final, they did even better with a 220. Victory is worth $6,428.57, and comes hot on the heels of their Non-Pro Derby crown at Red Deer’s Canadian Supreme in late September.

“She’s pretty fancy with a big stop,” said Lund of Youll Miss Me. “This feels awesome. It’s thrilling to win back-to-back like this, for her to be that consistent throughout the whole futurity season. I’m just so happy.”

Regional cutting guru Carl Gerwien was runner-up in Non-Pro Derby aboard WS Catty Lil Taz, a finish worth $4,885.71. And Gerwien, who already had accrued more career earnings than any other Canadian-based Non-Pro competitor in history, passed a huge milestone on Sunday — the million-dollar mark — according to the sport’s sanctioning body, the National Cutting Horse Association of Fort Worth, Texas.

NCHA figures show that Gerwien’s reserve championship in Non-Pro Derby — along with his sixth-place finish in the class aboard Catfull, worth $1,992.86, and his runner-up finish in Non-Pro Classic/Challenge on Mia Smart Quejana, worth $6,202.84 — pushed him into seven digits, and leave him with $1,005,348.36 in career earnings.

Kade Smith of Star, Ida., came out on top in Non-Pro Classic/Challenge, scoring a 221 on five-year-old One Stylish Spot and jamming $8,418.14 into his Wranglers. “We got conquered up here pretty good at Red Deer — got run over in the first go by a nasty cow — so it was nice to come back up here and redeem ourselves,” said Smith. “She’s really a very talented horse. Real smooth and graceful about the things she does. She keeps her ears forward, and looks really intent on a cow.”

“I’ve participated here before, but this was my first time in the championship circle. And DMAC Spoonshine didn’t really start getting shown until she was a six-year-old — she had two colts before she really got into the ring,” said Knoblauch. “Her career started a little late.”