Join the club: Another Hansen earns a Stampede penning buckle

Join the club: Another Hansen earns a Stampede penning buckle

CALGARY – Yes, you might say there was some scorekeeping going on at home Monday night. 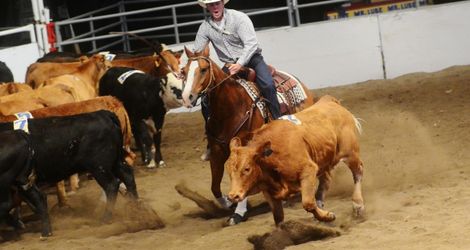 After the dust settled and the heifers were herded out of the Scotiabank Saddledome, Ben Thorlakson of Carstairs, Alta., had two career Calgary Stampede penning titles, drawing even with his daughter Lindsey. And Alex Hansen? He’s now got a Stampede buckle, the same total as his dad Lonnie . . . not to mention his sister Skylar.

“Yeah, she’d only reminded me every time we saw each other that she had a Stampede buckle and I didn’t,” chuckled the 22-year-old from Chestermere, Alta. “Now, I’m part of the club.”

The Calgary Stampede’s Team Cattle Penning Competition, presented by Calfrac Well Services, wrapped up four nights’ worth of wild and woolly action on Monday at the Saddledome with the 7 Class – and it was Thorlakson, Hansen, and Bruce Stewart of Cochrane, Alta., emerging from an enormous field of 268 teams to split a sizable cheque for $39,396.

Thanks in part to the Stampede’s 100th birthday, and limited-edition Centennial Trophy Saddles handcrafted by Vic Bennett Saddles up for grabs, the Team Cattle Penning Competition drew a record 764 teams from across the continent for its four divisions, with a total prize purse of $394,610.

Thorlakson, Hansen, and Stewart took the largest slice of the 7 Class prize purse, which totaled $131,320, thanks to a great evening of penning at the Saddledome. Entering the night standing 16th of 20 teams after two rounds of preliminaries in Okotoks, Alta., the trio chalked up a third-round time of 42.52 seconds, which put them fifth overall heading into the 10-team final. And in that last go-round, they did even better – stopping the clock in 39.43 seconds for a winning overall aggregate time of 163.12 seconds on 12 head of cattle.

Thorlakson, Hansen, and Stewart then had to watch the final four teams take their best shot, and hope their time stood up.

“Actually, I was feeling pretty relaxed right to the end,” said Stewart, who also accepted a Stampede championship buckle along with his teammates. “We had a plan, we stuck with it, and we had a little bit of luck, too. There were some great teams out there.”

Brian Cardinal of Millet, Alta., and Patty Hawrish and Bev Large, both of Sherwood Park, Alta., sewed up second place overall with an aggregate time of 172.74 seconds on 12 head of cattle, earning an impressive consolation prize – a cheque for $26,264.

Team Cattle Penning, a race against the clock, gives a team of three riders on horseback 60 seconds to separate three specifically identified cattle from a herd of 30 and direct them into a 16-foot-by-24-foot pen at the opposite end of the arena.

Teamwork is paramount, with all three riders working in harmony to cut out the correct cattle and drive them to the pen. Teams of riders enter the Stampede’s four classes based on relative skill and experience — in ascending order from 7 Class, to 10 Class, to 14 Class, to the trainers and travelling professionals of the Open Class.

“My horse, Joker, was really performing. And I’ve been working on the turnback aspect of the sport. I think it’s pretty important to keep ’em clean, so you’re not having to chase dirty (wrong-numbered) cows,” said Thorlakson. “This sport really gets your blood pumping . . . and as they say, it takes a half an hour to learn the rules and then a lifetime to learn the game.”