Jack, of Weyburn, Sask., is the first professional motormouth from the Land of Living Skies to win the Stampede’s International Livestock Auctioneer Championship. And the 22-year-old, who beat out nine other finalists under the Big Top on Saturday morning in the 24th annual Stampede showdown, is also the youngest champion in ILAC history. 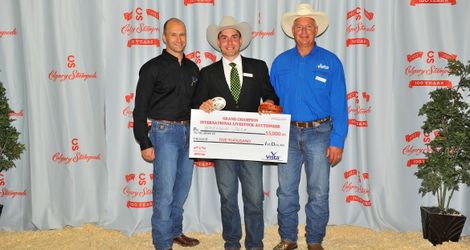 Jack, however, is already a grizzled – and accomplished – veteran at this fast-talkin’ game.

“I started auctioneering when I was nine years old. Sold my first $1-million cattle sale in Kelvington when I was 12. Started auctioneering full-time two days after I graduated from high school,” said Jack following his victory. “Cattle are my life. Ask me about a truck, and I know where the gas goes in. That’s about it. But ask me about a cow, sheep, goat, pig, I’ll tell you more than you’ll ever want to know.”

Jack receives a cheque for $5,000, a custom-designed Stampede buckle, and a champion’s jacket sponsored by former event winners – plus an automatic berth into the 2013 World Livestock Auctioneer Championship at Montgomery, Ala.

At just 22, Jack has already blazed a meteoric trail in auctioneering contests across the continent. At the Stampede, he was the 2009 rookie-of-the-year and placed third overall in each of the past two years. He was crowned the Canadian champion in 2011, and just last month he made his debut at the 2012 World Livestock Auctioneer Championship held in Hilmar, Calif., finishing fifth overall and earning rookie-of-the-year honours.

“I’m pretty much self-taught. I went for a three-day course in Regina . . . but I think a lot of the past champions have taught me more than an auction school has, for sure,” he said. “I think I’ve come into my own, here, the last year. And there’s my lucky green tie – this is my 31st auctioneer contest, and I’ve got 31 green ties. So I guess I’m not going to quit wearing them now.”

Romine, who’s been plying his trade for 31 years in Lexington, Ky., has made eight trips to Calgary, and advanced to the 10-man final all eight times. This marks his best result at the ILAC, after a fourth-place finish last summer. “I’m tickled to death,” he said. “The key to winning is just to make it to the final day. You do that, and it’s anybody’s game. I always look forward to July, because that’s my birthday month and I get to start packing for Calgary.”

Other auctioneers who competed in Saturday’s final, after advancing from a field of 24 during Friday’s preliminary round in Olds, Alta., were Ross Annett of Brooks, Alta., Chuck Cozzitorto of Hilmar, Calif., Justin Gattey of Ponoka, Alta,. Bradley Stenberg of Kronau, Sask., Dean Edge of Rimbey, Alta., and Mike Nuss of Minatare, Neb.

The Stampede’s ILAC is a one-and-done affair, with past champions discouraged from competing again.

“It was extremely tough competition this year. To me, this was one of the tighter contests we’ve ever had,” said International Livestock Auctioneers committee member Dan Skeels, who once again co-piloted Saturday’s final round under the Big Top. “There are years where you could say somebody’s really stood out, and won hands-down, but honestly, before I got the results and announced them, I didn’t know who was going to win it.

“I thought this thing was extremely tight. Each and every one of these guys can be very proud of themselves. And there are 14 guys who didn’t make it to today’s final who all did a great job.”

As per a longstanding ILAC tradition, the Australian Livestock and Property Agents Association sent over its national under-25 auctioneering championship to take part. This year’s representative from Down Under was 23-year-old Joel Fleming, of Tamworth, New South Wales, who took part in Friday’s preliminary round and auctioned off some strip loins Saturday after the finalists had all taken their turn at the podium.

“An unbelievable experience. Reading through the profiles, I see six of them were past Canadian champions. And other blokes have qualified for (WLAC) finals. So it’s really a world-class field. A very high quality of auctioneers here,” said Fleming, who sells cattle, horses, and sheep in Australia.

In the Land of Oz, noted Fleming, the vast majority of auctioneers don’t use a microphone, and the setting includes a touch of the theatrical. “Eighty to 90 per cent of Australia is outside, selling on catwalks, standing up over cattle, with no microphones,” he said. “The cattle are all penned, we walk along one side on an elevated rail, and the buyers walk along the other.”