CALGARY – The Calgary Stampede is 100 years old. Meanwhile, the Stampede’s UFA Steer Classic seems to get younger by the minute.

That’s because of initiatives such as the Junior Steer Champion Auction. Introduced last year as a new element of the UFA Steer Classic, it’s already planted an educational seed that’s expected to sprout into perpetual post-secondary scholarship opportunities for young exhibitors. 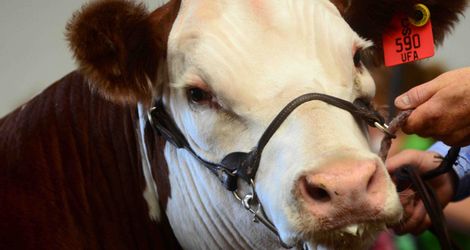 “Youth is a major component of a lot of programs at the Stampede. And the most logical and beneficial way of supporting youth, in our minds, is with further education,” says Stampede director Dave Sibbald. “By establishing the Junior Steer Champion Auction, we’re aligning ourselves with some of the fundamental pillars that the Stampede stands for. We could buy this or build that, but the organization believes that education, fundamentally, will provide the greatest legacy.”

The second annual Junior Steer Champion Auction will be held immediately following the 30th annual UFA Steer Classic under the Big Top on Saturday, July 14, with the grand champion and the reserve champion animals from the Junior Class going under the auctioneer’s gavel. Once again, a $3,000 post-secondary scholarship will be awarded to the owner of the Junior Class grand champion, while the reserve champion’s owner will receive a $2,000 post-secondary scholarship.

Due in large part to the introduction of the Junior Steer Champion Auction, exhibitors in the Junior Class made up nearly a quarter of the total entries in the 2011 UFA Steer Classic — and Sibbald believes those numbers will continue to rise. “We’ll probably see an increase of 15 to 20 per cent. And that may even be low, based on the fact that junior involvement in regional shows has risen dramatically this year,” he says.

Exhibitors in the UFA Steer Classic’s Junior Class are aged anywhere from 9 to 20, and “our ultimate goal is to see every youth who competes at our show earn a scholarship,” he adds. “In terms of agriculture, directly, if someone were to compete at the Stampede for eight to 10 years, and be somewhat successful, these kids would have a substantial portion of their (post-secondary) education costs paid for before they even go.

“None of these things — whether it’s the Calgary Stampede Show Band, the Young Canadians, or agriculture — are cheap for parents. There are major costs involved. If, at the end of it, we can have a pool of education money for the kids, I think that’s a very nice legacy.”

The UFA Steer Classic, meanwhile, is already the richest steer show in Canada — and it’ll dangle even more prize money this summer, thanks to sponsorship from the Canadian Hereford Association.

The owner of the grand champion at the UFA Steer Classic, the culmination of the regional steer-show season, will again collect a cheque for $11,000 — that’s $10,000 for best-in-show status, plus another $1,000 for best-of-breed honours. But should a Hereford take overall honours, the steer’s owner is in for a massive windfall — because victory in the Hereford class is worth a cool $10,000 on its own.

The Canadian Hereford Association has put up that big cash prize in recognition of the World Hereford Conference, which returns to Alberta this summer for the first time in 36 years. “This is a very big year for us,” says Gordon Stephenson, general manager of the Canadian Hereford Association. “The last time the World Hereford Conference was held in Canada was 1976 . . . and we won’t have it in Canada again during my lifetime, that’s for sure. So we wanted to make sure we put on a very special celebration.”

An estimated six hundred delegates from 17 countries will arrive in Calgary on Friday, July 13 for the 16th World Hereford Conference, and an international technical conference will be held Saturday, July 14 at the BMO Centre’s Palomino Room. After the Stampede wraps up, the World Hereford Conference will carry on with a Junior Bonanza Cattle Show on Monday, July 16, the National Hereford Show on Tuesday, July 17, and Rancher Day on Wednesday, July 18. All three events will be held at the Olds Agricultural Society.

“To make this a particularly memorable event, we’re highlighting a couple of aspects which I don’t believe have been part of past World Hereford Conferences,” says Stephenson. “We’re putting a lot of emphasis on a junior program (highlighted by the Junior Bonanza Cattle Show), and we’re also hosting a pen show on Rancher Day . . . we’re inviting as many Western Canadian commercial producers as want to attend.”

The 30th annual UFA Steer Classic will begin at 2:30 p.m. on Saturday, July 14 under the Big Top. For the second straight season, a Jackpot Heifer Show will follow the next day — with this year’s edition slated for Sunday, July 15 at 11 a.m. in the Northern Lights Arena.