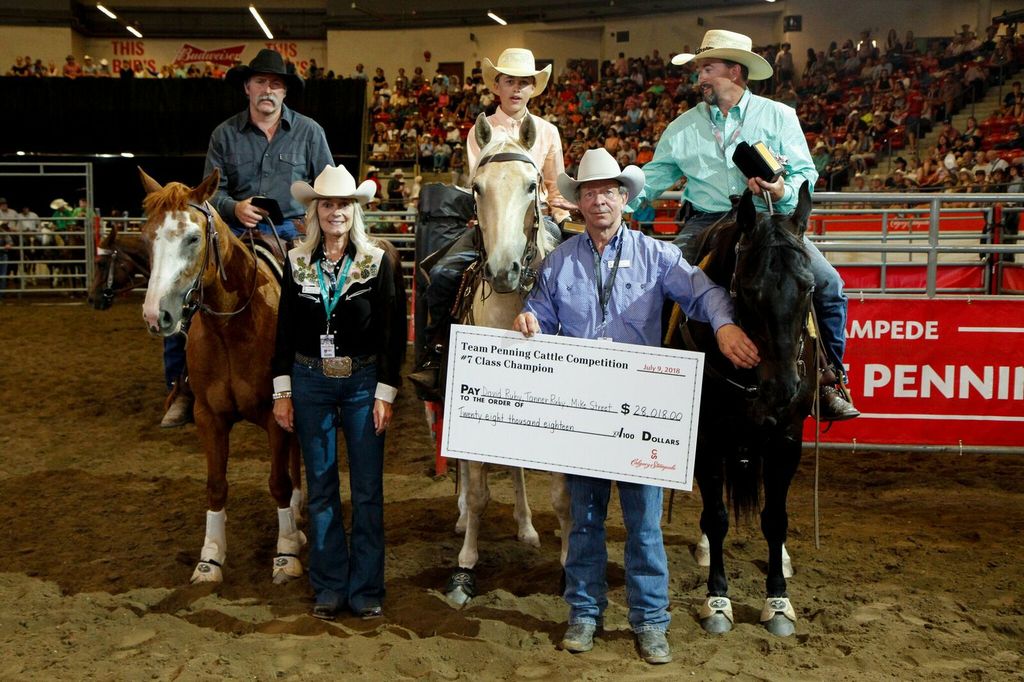 CALGARY — The Calgary Stampede proves time and time again to be a family event – and today, it was just that.

All four classes in the Team Cattle Penning event at this year’s Stampede were won by teams boasting at least two family members. David Ruby, his son Tanner and teammate Mike Street took the 7 Class title on Monday, completing the streak. So what’s the attraction?

“I love hanging out with my kids. It’s a great sport, there’s good people in it and it teaches them responsibility: looking after horses, combing them, feeding them, watering them,” said Ruby, who is from Didsbury, Alta. “If they’re doing it, then I’m doing it. Penning really is something we can do as a family.”

The team was presented with those coveted Champion Stampede belt buckles, commemorative bronzes and a cheque for $28,018 for their aggregate time of 157.650 with 12 cattle penned. The team was third going into the second of two rounds of competition during the finals at the Nutrien Western Event Centre. After cutting their designated three cattle from the herd and getting them halfway up the arena in under 20 seconds, an impressive feat, the effort stalled when one steer just wouldn’t get in the pen.

Riding in his second Stampede, 16-year-old Tanner went back to his training.

“I thought listen, just think about everything my coaches told me,” he said.

With Tanner in the hole and Street (from Penticton, B.C.) sweeping up, the trio penned the cattle at 36.14. Reserve Champion went to another team with family connections: Jim and Loralee Ward, and Kendayl Sieben. They took home $18,678 for their aggregate score of 159.210 with 12 cattle penned.

In the sport, teams of three riders have a scant 60 seconds to separate three cattle wearing a designated number from a herd of 30 and direct the animals into a 16-foot-by-24-foot pen at the opposite end of the arena. Teamwork is critical, with the riders working in harmony to cut the correct cattle and drive them to the pen. But while that’s taking place, the rest of the herd must remain behind a designated line. If an animal that’s not one of the team’s designated cattle crosses the line, that’s a trash out and the team is eliminated.

The four classes are based on relative skill and experience — in ascending order from 7 Class, to 10 Class, to 14 Class, to the trainers and travelling professionals of the Open Class. To accommodate the nearly 800 teams that entered the event this year, organizers expanded qualifying from two days to three. The top 20 teams in each class progressed to compete in the third round, with the top 10 teams moving on to the finals. More teams meant more money, so the overall prize money for the event was approximately $393,000 this year. The purse for 7 Class, with 207 teams entered, reached $94,392.

Tanner also rode on a team with his younger sister Brooklyn (competing in her first Stampede) in the 7 Class final. Along with teammate Rene O’Rourke, they finished 15th. The community around penning is one of the reasons the family is so committed to the sport, Ruby said. Since getting into penning a few years ago, they’ve been encouraged by veterans and fellow competitors alike.

“Dusty Wigemyr, Tom Thorlakson, Joel Lesh — we listen to those guys a lot. They know exactly what they are doing. Down here we have learned a lot from Joel (Open and 14 Class Champion this year) in the last week, just hanging around and watching and listening to how he talks,” Ruby says. “It resonates with us. My kids are good that way, they really listen well and catch on quick. Hopefully, we can keep this going.”