A nine-year-old milker supreme — owned by Wendon Holsteins of Innisfail, Alta., and intriguingly christened CRF Lheros Rudolph Pete Joel at her original farm — was the toast of this year’s Calgary Stampede Dairy Classic Championship Show over the weekend at Stampede Park. 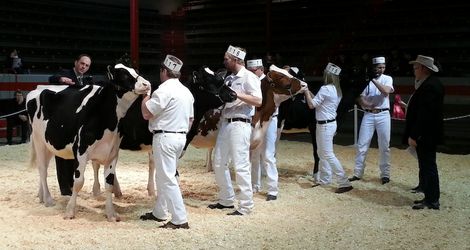 Grand champion in the Black and White Holstein breed, winner of the Mature Cow class — this must be a heavily decorated veteran of the dairy show ring, right?

“Actually . . . you’re wrong. It’s kind of an interesting story with her,” says Don Chalack of Wendon Holsteins with a laugh. “We bought her from Colpitts Ranches (in the Calgary area) when they were phasing out their dairy operation. I went there to look at some cattle, and I saw this cow out in the pasture, and she was about a three-year-old at that time.

“We bought the cow and never did actually show her until last year. We took her to the Dairy Classic for the first time in her life — and she goes and wins the Mature Cow class, right out of the blue.”

The Dairy Classic, with roots all the way back to 1886, is a proud tradition of the southern Alberta foothills, and the marquee show on the annual Western Canadian dairy industry calendar. This year’s edition of the Stampede’s Dairy Classic, held Friday and Saturday in the Agriculture Building, was conducted by show judge Carl Phoenix of Sunderland, Ont., and Chalack has a pretty fair idea of why his durable milker stole the show.

“It’s her conformation. She has a great udder, and great feet and legs — those are the two things they need for longevity. She’s on her eighth lactation . . . that’s pretty unusual for a dairy cow nowadays to last that long, let alone still be a show cow,” says Chalack, who runs a small dairy operation and genetics program near Innisfail.

“In the Holstein industry, we have an appraiser hired by Holstein Canada to visually appraise each cow and give them a score out of 100. She’s scored at 94 points . . . and to put it in perspective, there’s maybe four cows in Canada at 97 points, about a dozen at 96, maybe eight or 10 at 95, and a few at 94. So she’s really at the high end when it comes to conformation.”

CRF Lheros Rudolph Pete Joel nosed out Robella Reg Macy, owned by Lampada Holsteins of Carlyle, Sask., which had to settle for reserve champion status in the Black and White Holstein category.

Jason Rietveld of Fort Saskatchewan, Alta., also knows a good show cow when he sees one. Rietveld, of Rietveld Dairies Ltd., is a veteran of the dairy show circuit — Red Deer, Saskatoon, Leduc’s Alberta Dairy Congress, even Toronto’s Royal Winter Fair — and has high hopes for one of his milk manufacturers in particular.

Rietben Sterling Miley made a splash during her debut in the Junior Three Year Old Female Class at the Stampede over the weekend — earning second place in that class, and then taking top honours in the Red and White Holstein breed.

“She just calved her first time in December. This year she looks good, and we’re looking to get a little more competition for her. She gained a lot of friends in Calgary, and she’ll be around all year,” said Rietveld. “She’s tall and long with a good frame, and a really good foreudder.”

This year’s competition drew dairy farmers from Alberta and Saskatchewan, with nearly 75 cows entering the show ring. The Dairy Classic did not hold a Jersey show this year, owing to lower registration numbers.

This year’s Dairy Classic also included a herdsman competition for all exhibitors, and a showmanship competition for young exhibitors in four different age classes, as well as the annual Youth Dairy Cattle Judging Clinic, led by Dr. Gordon Atkins of the University of Calgary’s Faculty of Veterinary Medicine and presented by BFL Canada Insurance Services Inc.