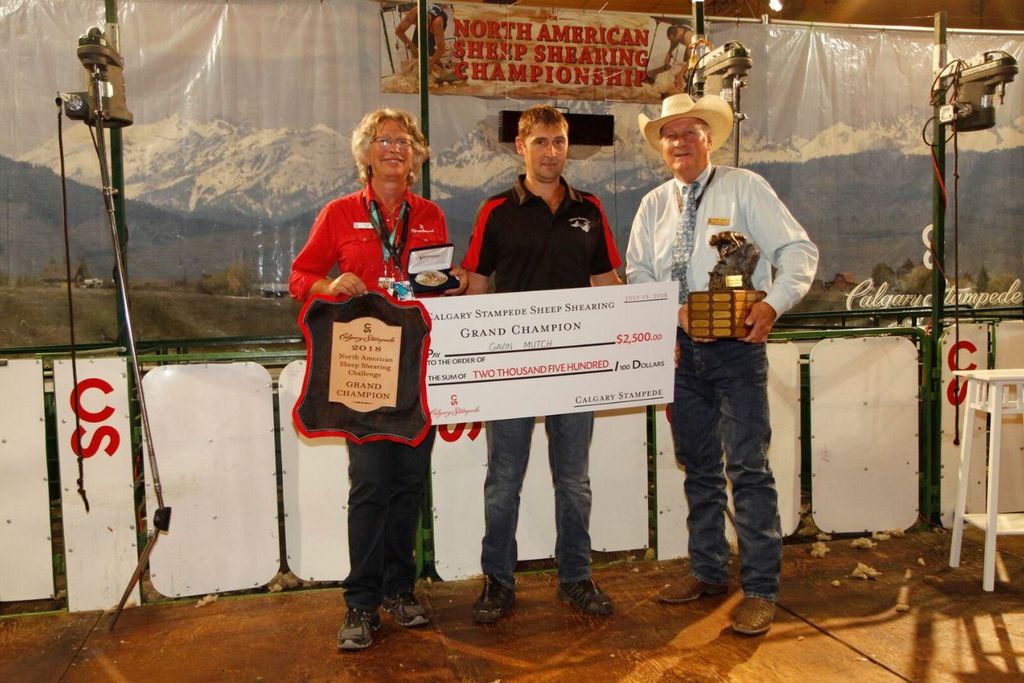 CALGARY — It’s a good thing wool is flame resistant, what with the smoking times Gavin Mutch laid down in the North American Sheep Shearing Challenge at the Calgary Stampede Sunday night.

The 2012 World Champion sheared a sheep in 46 seconds in the semi-finals, the fastest time posted at the event held in the Victoria Pavilion over the weekend. For Mutch, shearing these days is about working smarter, not harder.

“There are some shearers working into their 50s. Now, they’re saying that shearers actually hit their peak in their late 30s,” said the 39 year old from Taranaki, New Zealand, who grew up on a sheep farm in Scotland. “When you’re younger, you’re probably stronger and have the exuberance of youth, but once you get older, the control comes. It shouldn’t get easier, but it does. Experience kicks in.”

Mutch took the Champion title in the final round against Timothy Wright of Hart, Michigan with a score of 30.83 to Wright’s 39.88. Mutch received a Stampede belt buckle, a commemorative silver bell, a slunk and a cheque for $3,500 for his win. Reserve Champion Wright received a belt buckle and $3,000.

Mutch, who qualified to take part in the 2019 World Shearing and Woolhandling Championships in France before coming to the Stampede, isn’t shearing as much as he used to. That’s relative, though.

With more than $11,000 in cash prizes and awards up for grabs, competitors in the North American Sheep Shearing Challenge went head-to-head in the timed and judged event. On each of their four sheep (six in the finals), shearers were scored on how many passes they completed, the quality of the cut, any nicks on the sheep, leaving wool on the sheep, and — of course, time. In shearing, the lower the score, the better.

In the Intermediate Division, David Higgins of Ellensburg, Washington was named Champion with a score of 47.9, while Amber Petersen from Cornwall, P.E.I. took Reserve Champion with her score of 48.63. The International Team Championship went to Team USA, composed of Wright and Hilary Gietzen (Minot, North Dakota).

Prior to the competition, Mutch paired up with three-time Stampede Champion Mike Pora to conduct a two-day shearing clinic for local shearers and fellow competitors alike. (Pora, from Australia, just missed qualifying for the final round this year.) In a place like Canada that doesn’t have a deep history of sheep shearing, it’s important to share the knowledge that comes with that hard-won experience, Mutch said.

“That’s the way any country progresses: by using the top shearers in the world, teaching the young ones. I was very lucky when I was starting out, that’s what I was exposed to. That is what I am trying to do now, help the next generation.”

Every shearer has a unique story on how they got into the time-honoured industry. Take Intermediate Class competitor Tracy Jarratt. A fibre artist, Jarratt wanted to recreate a fabric from the Middle Ages for a weaving project, but needed a rare wool. She tracked down an Alberta farmer with Icelandic sheep and started buying fleece from her. When the farmer retired, she told Jarratt she was giving her four sheep.

“I said, ‘I live in a two-bedroom apartment. What am I going to do with four sheep?’ She said, ‘Board them.’ So a lady in the same spinning club I belonged to said she’d house the sheep in her barn. Now we have 70 sheep between us,” Jarratt said.

That was in 2000. At the time, Jarratt faced a problem common to many acreage farmers: four sheep really aren’t much of a paycheque for a shearer. So she enrolled in a course and started doing it herself. It just happened that a CBC crew was filming at the shearing school. Then, the footage aired.

“People started calling me, saying, ‘My sheep haven’t been shorn for two years. I don’t care what they look like, just come do them.’ Turned out, there were more people in the same boat as I was,” says the 52-year-old from Irricana, Alberta. “So, I started She Sheers Sheep and started getting better and faster. Then, I was invited down to the Stampede. I’ve learned so much about shearing from the competition down here.”

That practical education propelled her to the Intermediate class Champion in the Stampede’s North American Sheep Shearing Challenge in 2015. That win came shortly after a two-year break from shearing. Jarratt, who broke her back as a child, underwent spinal fusion followed by extension rehabilitation.

“I’ve got all my feeling back, all my motion back, and I am shearing better than ever,” said Jarratt, a heavy-equipment operator. “I was so depressed when I thought I couldn’t shear again.”

She loves working outdoors, the people she meets and the animals she cares for — “the ones with names and histories.” It’s also her “sheep diet”: Jarratt lost 120 pounds after she started shearing.

“I like the challenge of it. It’s an exercise I can do that you can’t quit. You have to finish. You can’t say, ‘I’m done’ after half a sheep or half a flock. You have to keep going and that’s a real incentive to me. Plus, I am being paid to do exercise.”

For the full results from the North American Sheep Shearing Challenge, visit ag.calgarystampede.com/results.