CALGARY – Pat Bolin joined a pair of Oklahoma’s finest team cattle penners for a victory lap around the Scotiabank Saddledome on Sunday night. Just call Bolin an honourary Sooner – because he thoroughly understands the concept of sooner, rather than later. 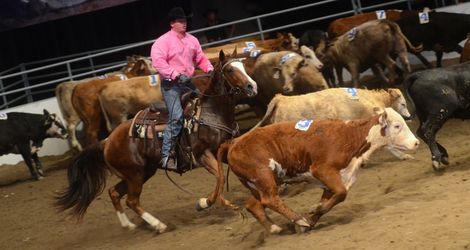 Bolin, of Stettler, Alta., and teammates Joel and Jordan Lesh, brothers from Stillwater, Okla., appeared to be heading for disaster during the Open Class final of the Calgary Stampede’s Team Cattle Penning Competition, presented by Calfrac Well Services – with one “trashy cow” over the foul line, and one stubborn bovine headed in the wrong direction.

But in a breathtaking display of skill and dexterity, the trio turned its fortunes around in a split second – with Bolin turning his quarry the other way, Joel taking out the trash, and the team posting a very respectable final-round time of 30.77 seconds under the circumstances. And their aggregate, four-round time of 121.98 seconds on 12 head of cattle was enough to claim the title in the Open Class – and a cheque for $13,248.

“It’s a total team deal,” said Bolin of that quick-thinking rescue. “It’s been my goal ever since I started penning, about 12 years ago, to win a Stampede buckle. And to be able to do it in the Centennial year, that’s just icing on the cake, really.”

While Bolin was celebrating his first Stampede penning triumph, Joel and Jordan are no strangers to the Saddledome winner’s circle. This marks Joel’s third Open crown in four years at Calgary, and Jordan’s second straight – the duo claimed victory alongside Brian Buckner of Magee, Miss., in the Open class a year ago.

The Stampede’s Team Cattle Penning Competition, presented by Calfrac Well Services, has drawn a record 764 teams from across the continent for its four divisions, with a total prize purse of $394,610.

That’s enough to impress even a well-travelled penning professional like Joel Lesh, who estimates he and Jordan put on about 160,000 kilometres a year heading from one competition to another.

“This is a big competition. The second-biggest show we go to, besides the AQHA (the annual American Quarter Horse Association World Show in Oklahoma City),” he said. “And it’s not just the team count, it’s the atmosphere. This is the biggest crowd we ride in front of. It’s televised (webcast) now, just like the AQHA is. It’s seen worldwide.”

The triumvirate of Russell Armstrong of Armstrong, B.C., Devin Antony of Calgary, and Thomas Thorlakson of Carstairs, Alta., finished exactly three seconds back of the winners, their time of 124.98 seconds on 12 head earning them the reserve championship and a runner-up team cheque for $8,832.

Team Cattle Penning, a race against the clock, gives a team of three riders on horseback 60 seconds to separate three specifically identified cattle from a herd of 30 and direct them into a 16-foot-by-24-foot pen at the opposite end of the arena. Teamwork is paramount, with all three riders working in harmony to cut out the correct cattle and drive them to the pen. Teams of riders enter the Stampede’s four classes based on relative skill and experience — in ascending order from 7 Class, to 10 Class, to 14 Class, to the trainers and travelling professionals of the Open Class.

Earlier Sunday evening, during the third round of competition that narrowed the field from 20 teams to 10, the unit of Dave Fraser of Claresholm, Alta., Will Hanson of Fort Saskatchewan, Alta., and Dave Marsh of Southey, Sask., recorded the fastest single-round time of the Stampede’s Team Cattle Penning Competition at the Saddledome to date this year – a scorching 25.16 seconds.

The Open Class attracted 69 teams this year, with the first and second rounds of competition being played out on Wednesday at the Okotoks Agricultural Society in Okotoks, Alta. Total prize money for the Open Class this year was $44,160.

The Stampede’s Team Cattle Penning competition will wrap up on Monday, July 9 with the third round and the final of the 7 Class, starting at 5:30 p.m. at the Saddledome.