Calgary, AB – The Calgary Stampede Light Up the City, presented by TransAlta will be a spectacular fireworks display to celebrate the Stampede’s first 100 years and the beginning of the next 100 years.  In addition to the four viewing locations around the city, the Stampede announced that Stampede Park will come alive with a roof-top special effects chase. 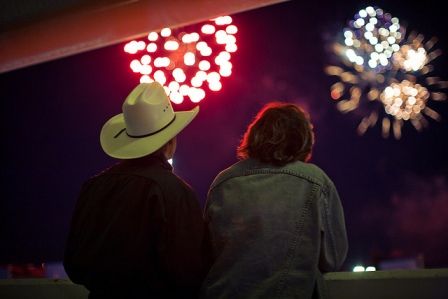 For the final minute of the fireworks display, roof-tops will explode with special effects, mesmerizing the crowd.  The chase will begin with the top of the grandstand followed by the Agriculture building, the Corral, BMO Centre finishing with the Big 4 Building.

“Light Up the City is our way to celebrate with the entire city,” says Mike Casey, president and chairman of the board, Calgary Stampede.  “Thousands of Calgarians will be able to view the fireworks from their own neighbourhoods.  It will be a once-in-a-lifetime event for Calgarians and visitors.”

For people wishing to gather before the fireworks, celebrations will be held at Heritage Park Historical Village and WinSport’s Canada Olympic Park where friends and families can come together and celebrate with entertainment and special programming elements.

For those hosting their own Stampede celebrations, Stampede in a Box is the perfect way to set the mood.  At only $39.95 it has everything you need to host the perfect Stampede party.  Contents include: Centennial napkins, tablecloth, Red Solo cups, party cowboy hats, Centennial Frisbees and more.

Light Up the City will be on the first three and last three evenings of the Stampede (July 6, 7, 8 and July 13, 14, 15).  The 12 minute fireworks display will begin between 11 p.m. and 11:30 p.m. and will be synchronized to music simulcast through QR77, Country 105 and Q107. The five viewing sites for the Light Up the City are Stampede Park, WinSport’s Canada Olympic Park, Heritage Park, Elliston Park, McCall Lake and South Glenmore Park.

*Media can access the video shown today can be accessed through our ftp site at ftp://ftp.calgarystampede.com

Username: media, Password: #1source (in the Light Up the City folder.)

Light up the City thumb