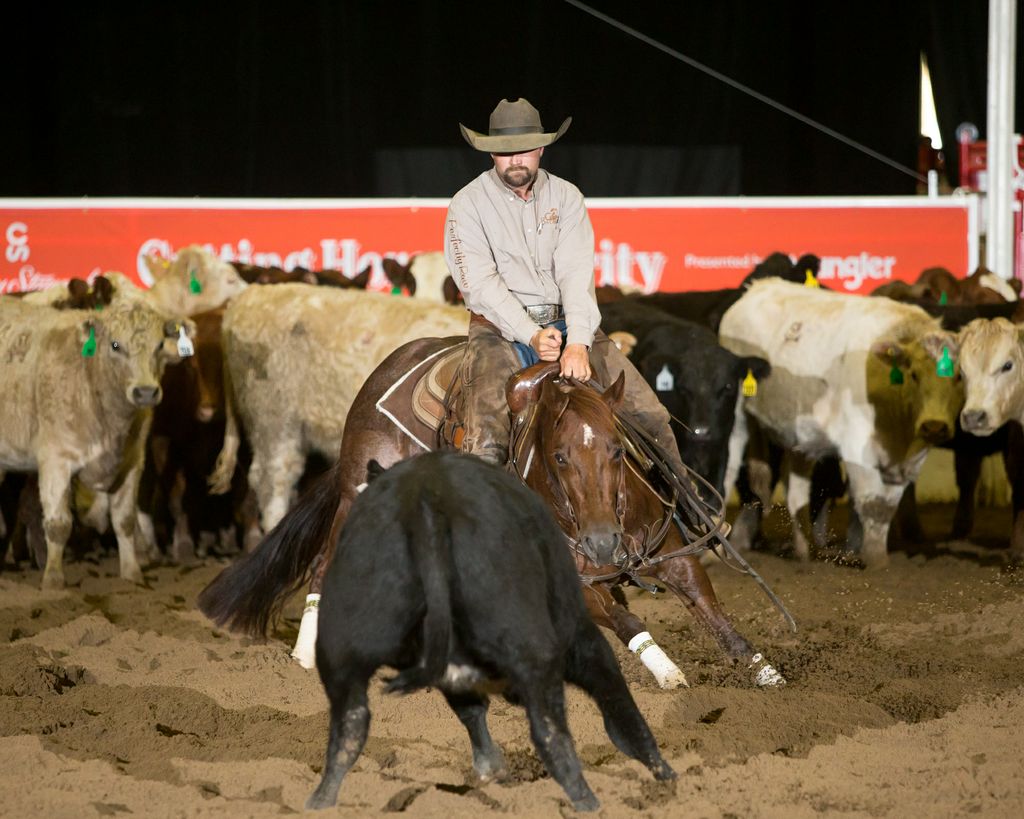 Local trainer Dustin Gonnet is celebrating a hard-earned win, after capturing the championship in the Open Futurity class at the 2016 Calgary Stampede Cutting Horse Futurity, presented by Wrangler.

Gonnet, of Cayley, Alberta, just squeaked into the second go on RPL Cat N Around after posting a mediocre score in the first round. He was given a 205 after one of his cows was judged a hot quit. By contrast, the highest qualifier came in with a 217.

That’s exactly the score he posted aboard RPL Cat N Around in the second round, despite facing down a tough second cow. “If I wouldn’t have been nailed with that hot quit, I might not have been near as aggressive as I was,” he remarked. “I knew I had to go big or go home.”

During the Open Futurity final, Gonnet came out on top in a field of 15 finalists with a score of 219 from the five-judge panel, earning a payout of $17,839.

The prestigious event, sanctioned by the National Cutting Horse Association, attracted Canadian riders from across the prairies and drew American riders from as far afield as Texas. In total, 331 horse-and-rider pairs competed in seven classes for a share of more than $355,000 in prize money at the Stampede’s Cutting Horse Futurity, which ran from Wednesday, Oct. 12 through Sunday, Oct. 16.

In the sport of cutting, each horse and rider is faced with a herd of cattle and just two and a half minutes on the clock. Working together they separate, or ‘cut’, a cow from the herd.  The rider then drops the reins and allows the horse to use its instincts, strength and agility to mirror the movements of the cow and keep it from the herd.  This can be repeated two more times as long as there’s time on the clock.

“She is super confident about her job. She’s a show pony,” Gonnet said of his mare. “She might not be the funnest to school at home, but when you walk across the timeline, she knows her job.”

She had to, as competitors noted the cattle at this year’s event were more challenging than usual. Jody Radomske, who tied for Champion with Les Jack in the Non Pro Futurity class, experienced it first-hand.

“When I had that 201 (in the first go), I was last in a very tough set of cattle. I was just happy to have that 201 because there weren’t that many people who had that much,” Radomske said of her outing on Im Playin It Smooth, owned by Radomske’s husband Harland Radomske.

Radomske, of Ellensburg, Wash., took home $8,422 for her score of 210 in the final round, the same score posted by Jack and his horse RG Cat. The two teams split the prize money for the Champion and Reserve Champion titles.

“I got in on the last hole in the finals,” said Jack of Rocanville, Saskatchewan, adding, “I am pretty happy with the results!”