“I’ve had a couple of basket cases. Sometimes, it’s like buying a pig in a poke, because you don’t really know what you’ve got,” said the retired mechanic from Olds, Alta., on Sunday evening. “But I tend to lean towards something that’s not going to cost me an arm and a leg to fix up.” 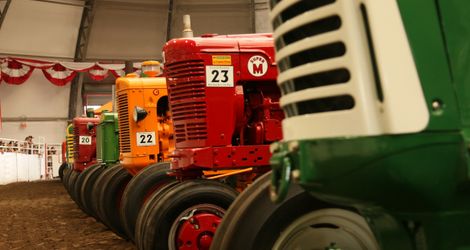 Ross, who estimates he’s collected close to 30 vintage tractors on his quarter-section spread near Olds, earned the biggest victory of his pulling career on Sunday evening during the Calgary Stampede’s 22nd annual Vintage Tractor Pull and Vintage Tractor Show & Shine. Ross and his 1950 Allis Chalmers WD, with its distinctive orange color scheme, won the Featherweight Division – for mechanical beasts tipping the scales at anywhere from 1,000 to 3,999 pounds – by pulling a weight sled a total of 232 feet, seven inches through a two-run total under the Big Top on Saturday and Sunday.

These days, Ross dusts off various specimens from his motor pool for about 10 tractor pulls a year throughout central Alberta.

“About six or seven years ago, I bought my uncle’s Farmall M, and things progressed from there. I just kind of got the bug,” he said. “And I don’t like having fancy paint jobs, either, because kids just love to climb these things, and I never want to say no.”

The Stampede’s Vintage Tractor Pull and Vintage Show & Shine, an invitational event, saw 36 enthusiasts from across Southern Alberta congregate under the Big Top during the Stampede’s Centennial year and show off the mechanical muscle of their vintage machines, built in 1960 or earlier, in six weight divisions.

The annual Vintage Tractor Show & Shine portion of the event, held in the Big Top infield on Saturday afternoon, gave owners a chance to brag about their pride and joy, with Olivers, McCormicks, International Harvesters, Minneapolis Molines, John Deeres, and more – ranging in horsepower from 20 all the way up to 80 – displayed in all their splendor.

The Vintage Tractor Show & Shine champion receives a Stampede buckle for all the spit, polish, and elbow grease applied for an appreciative Stampede crowd – and this year it was Cal Vance of Medicine Hat, Alta., and his 1947 John Deere AR.

Ross, by the way, authored a worst-to-first story on Sunday – although it was behind the wheel of different vintage tractors.

“Last summer, I was dead last. And the year before, I was close to the tail end of my class,” he said with a sportsmanlike chuckle. “But somebody’s got to be last, right?”