Michelle Fior realized how much the Calgary Stampede is a part of her life when she looked around at the guests invited to her two-year-old son Rocco’s birthday party. She saw that three quarters of them were people she had met through the Stampede.

Michelle met another important person in her life, her husband Sheldon, at the Stampede as well.

It all started when the family moved to Calgary from Ontario. Her dad Addiano loved marching bands. So off they went to the Stampede Parade where Michelle saw the Calgary Stampede Showband for the first time and knew immediately she wanted to be part of it. As it happened, the only availability was for the clarinet and the rest, as they say, is history – she joined in 1985 and played until 1991 and then “graduated” to the Band of Outriders.

“Being a volunteer with the Stampede means being a part of something bigger than me and that is a huge part of Calgary. I have loved the opportunity to meet and work with new people,” says Michelle Fior.

Michelle is an extremely energetic person and passionate about all things Stampede. She is also a very giving person, both with her time and also money. As a result, she recently made a donation to the Stampede Foundation’s “We’re Greatest Together” Family Campaign.

“Stampede means so much to me. The 100th year was spectacular but now I want to be part of the growing and evolving second century Stampede,” says Fior.

Sadly her father died in early 2010, so in addition to her personal gift, Michelle is working with the Stampede Showband and Calgary Stampede Foundation employees to create a legacy gift in his memory. “It’s early days yet but I have in mind a scholarship fund for a member of the Stampede Showband. It just feels right and I know it would be a concept my dad would like,” says Fior.

Over and above her incredible commitment to the Stampede, Michelle teaches at St. Brigid School. 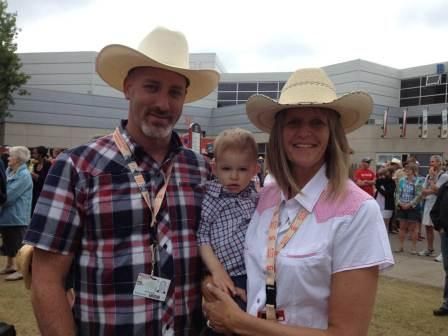