CALGARY – The year was 1988, and Sharon Cooke was about to enter into a long-eared love affair.

She didn’t know it at the time, of course. When Sharon and her husband Grant, of Blackie, Alta., headed down to Nebraska to take in the very first miniature donkey sale in the United States, their intent was to diversify the Cooke Livestock brand, which over the years has included Angus cattle and Arabian horses. 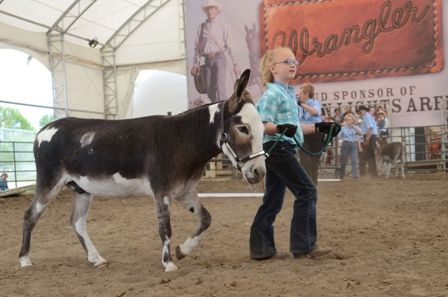 It was purely business . . . but as Sharon soon found out, it was packed with pint-sized pleasure.

“We had some llamas with some friends, and then we’d heard that the man who started the llama market in the U.S., Fred Hartman, had got together about 500 miniature jennies (females). We thought, ‘Well, if Fred Hartman thinks this business is going to work, let’s get in on the ground floor,’ ” recalls Sharon.

“We felt miniature donkeys would be a good fit with our farm, but we went into this with a business approach, and I thought I’d never replace my Arabian horses with a donkey,” she adds. “A few years later, though, I looked around at the horses, and I thought: ‘Boy, your ears are short. I don’t like short ears anymore.’

The Cookes would eventually buy the Hartman herd, start their own annual miniature donkey seminar-auction-show weekend at Blackie in 1992, and become trailblazers in their own right, since nearly every mini donkey breeder in Alberta began with Circle C stock from the Cookes’ breeding herd.

The Cookes played an integral role in 1997 as mini donkeys made their first Calgary Stampede appearance as part of an organized agricultural event — and 15 years later, they’re every bit as involved as these lovable, pint-sized packages get ready for another go-round.

The Stampede’s annual Miniature Donkey Showcase runs from Sneak-a-Peek night, on Thursday, July 5, through Sunday, July 8 in the Agriculture Barns.

Miniature donkeys — standing 36 inches tall or less, but packed with personality — are a perennially popular attraction at Stampede. Year after year, Stampede exit surveys constantly show these sociable little critters among visitors’ lists of personal highlights. That magnetism may be a surprise to some, but not to Wendy Lyon, who chairs the Stampede’s Miniature Donkey committee.

“They’re such gentle little souls,” says Lyon, who operates the Stonegate Acres mini donkey breeding farm in De Winton, just south of Calgary, with her husband Wayne. “Some people believe they’re stubborn, but they’re not in any way — they’re just so bright and cautious. They’re not a flighty animal like a horse, so they’ll stop and observe what’s around them before they proceed.

“They’re a gentle, trusting animal that forms a very strong bond. When you come home and you’ve had a tough day at work, they’re waiting for you at home with unconditional love. Their great big ears, their great big eyes — they’re just wonderful animals.”

Because of their magnetic, calming nature, miniature donkeys are popular as companion animals on farms and acreages. And because of their intelligence, they’re also used extensively in the performance ring, in classes ranging from halter, trail, in-hand jumping, and snigging to pleasure driving, obstacle driving, pole dragging, pole bending, and barrel racing with carts.

In just under a quarter-century, the Cookes have sold hundreds of mini donkeys all over the world — to owners and breeders in Ireland, Belgium, and France, nearly every American state, and more than half of Canada’s provinces. Wayne Lyon, meanwhile, is constantly being booked for weekend training sessions with owners across North America.

Top breeders in the industry, as they do every year, will be on hand at the Stampede’s Miniature Donkey Showcase to answer questions about these little Jennets and Jacks.

The miniature donkeys will have their special day in the Agriculture 100 spotlight on Saturday, July 7 at the Victoria Pavilion. Former Stampede champions will be brought back to The Greatest Outdoor Show on Earth to mingle with Stampede visitors, while the minis will also demonstrate their ring prowess by negotiating obstacle courses that include bridges, pylons, jumps and ropes. And the younger visitors will surely get a kick out of the donkey-ear headgear giveaways.