CALGARY – Waxing ecstatic about this battle in the saddle, Pete Branch invokes the lingo of the sweet science. You know, the squared circle.

“It’s two really good horses, and as I told somebody the other day, they kind of remind me of two heavyweight or middleweight boxers just standing in the ring, trading punches,” says Branch, the veteran cutting horse trainer from Farwell, Texas. “That’s kind of the way it’s been, all year long . . . they’ve just gone back and forth. It really is a lot of fun.” 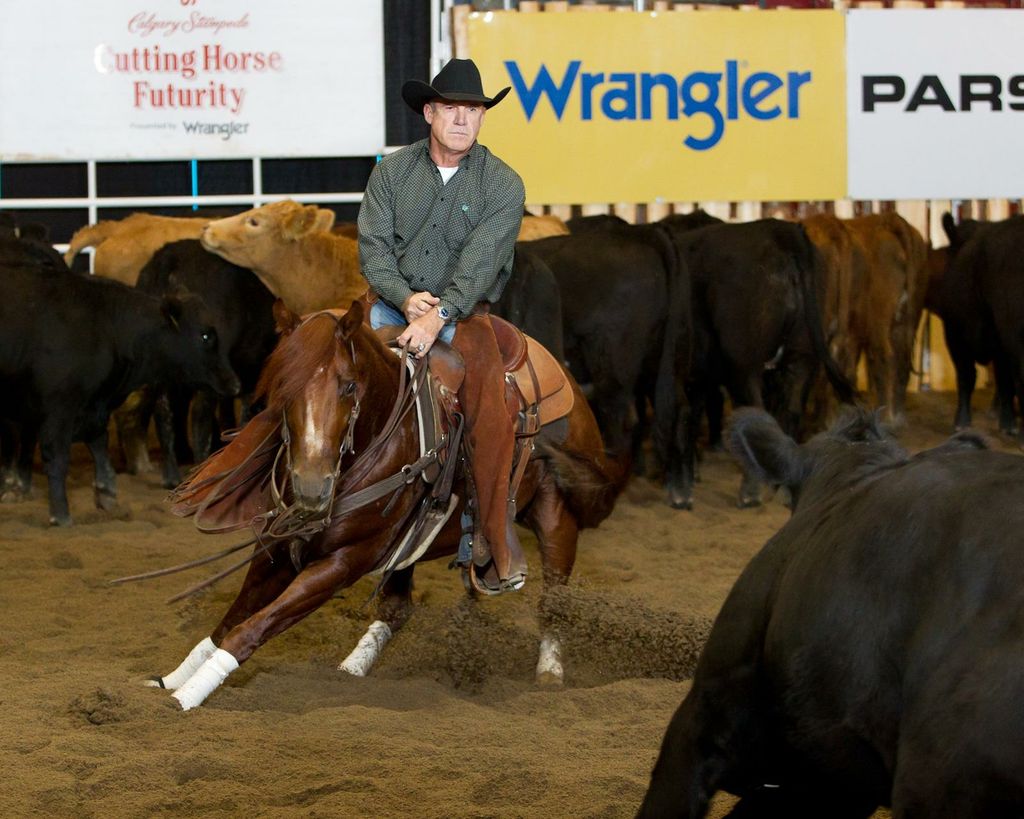 Branch and Kit Kat Sugar, a four-year-old stallion owned by Lonnie and Barbara Allsup of Clovis, N.M., lead the NCHA Open Horse of the Year chase with 84 points, while Lloyd Cox of Fort Morgan, Colo., and Hottish, a four-year-old stallion owned by Dustin and Deena Adams of Dublin, Texas, are hot on their heels with 71 points. Branch and Kit Kat Sugar are fresh off victory at the Brazos Bash Derby Open at Weatherford, Texas, on Oct. 2, with that win allowing them to open up a bit of breathing room on Cox and Hottish entering Calgary.

The two horse-and-rider teams are going head-to-head at the Stampede Futurity this week in the Open Derby class.

“Once we won the Breeder’s Invitational (at Tulsa, Okla., in May), that put us close enough to give it a shot. We started hauling quite a bit at that point,” says Cox, who, at one point this year, had opened up a 10-point lead in the NCHA’s Open Horse of the Year competition with wins at the South Point Futurity in Las Vegas and the Idaho Futurity in Nampa, Ida. “I never have tried to win (the Horse of the Year nod), and it’s been a lot of fun. Two really good horses. They’ve both done really well. Either one can win at any time, given the right cattle and the right situation.”

The Calgary Stampede Cutting Horse Futurity, presented by Wrangler, is the premier annual cutting event in Canada, with more than 100 riders and 200 horses regularly arriving from as far afield as Texas and Ontario, and an annual prize purse of more than $300,000 — including $100,000 in added money this year.

The 2012 edition — with 267 total entries, and $318,500 in prize money — offers extra incentive, with the final seven Centennial Trophy Saddles going up for grabs as part of the Stampede’s 100-year birthday bash. Those saddles will be awarded to the Open and Non-Pro champions in each of the Futurity, Derby, and Classic/Challenge classes, as well as the winner of the Non-Pro 7-Up class.

The Stampede’s Cutting Horse Futurity features Open and Non-Pro rider categories — Open for horse trainers and pros, and Non-Pro for those who make no part of their income by training horses.

Non-Pro entries can only ride horses owned by themselves or immediate family members. Equine age classes are headlined by the Futurity category for three-year-olds, and also include Derby (four-year-olds) and Classic Challenge (five- and six-year-olds). On the Non-Pro side, there’s also the 7 Up class for horses aged seven years or older. A $50,000 Limit Amateur Class, for those with NCHA earnings of less than $50,000 as of Jan. 1, 2012, is also offered within Non-Pro’s Derby and Classic Challenge classes.

The Open finals for trainers and pros — Open Derby, Open Futurity, and Open Classic/Challenge — are slated for Saturday evening at the Stampede Corral, starting at 5 p.m. And while Branch and Cox have hauled their Open Horse of the Year contenders up to Calgary together, they’ll go their separate ways following the Stampede Futurity, as they head to their final points shows of the season — Branch and Kit Kat Sugar to the Southern Futurity in Jackson, Miss., Cox and Hottish to the Pacific Coast Cutting Horse Association Futurity at Paso Robles, Calif.

Kit Kat Sugar, a High Brow Cat son out of Sugar N Dulce that was raised and started by Branch, “is a real smart horse, and pretty easy for a stud. And other than being really, really smart, which is so important on today’s cows, he’s super-quick,” says Branch. “Even if he gets tricked, he’s so quick he can get back in front of one . . . he covers it up well.”

Hottish, a Spots Hot son out of Stylish Play Lena, was broken and started by Adams, and entered Cox’s stable at the start of his three-year-old season. “He’s got a little bit of everything. He stops and moves pretty good, and he’s got a real pretty way on a cow,” says Cox, who ranks third among cutting’s all-time leading trainers with more than $5.5 million in career earnings, trailing only Phil Rapp ($7.6M) and Matt Gaines ($6.2M). “He does a lot of things really nice.”

Following with Stampede Futurity tradition, a silent auction to benefit the annual Bill Collins Youth Excellence Awards will be held on Saturday night. Items can be viewed, and silent auction bids made, starting at 5 p.m. in the concourse of the Stampede Corral.

Work has begun on one of the most significant infrastructure projects in Stampede history — the Agrium Western Event Centre, which will be the largest facility of its kind in Canada upon completion.

For details and artistic renderings of this magnificent 150,000-square-foot agriculture showcase and competition venue, scheduled for completion in spring 2014, visit http://corporate.calgarystampede.com/about/park-development/agrium-western-event-centre/