If you’ve been on Stampede Park lately, you’ve probably noticed lots of construction equipment, men in hard hats and the bones of a brand new, very substantial building. That’s the new Agrium Western Event Centre, the first of three major development projects to be built over the next several years. 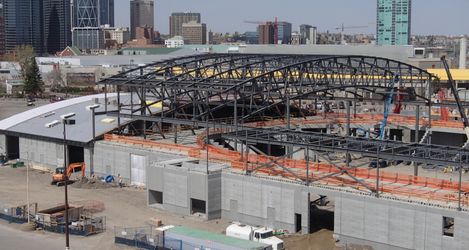 As the Calgary Stampede continues to evolve as a world-class, year-round gathering place, Guy Weadick’s original goals remain at the heart of our vision. When Weadick founded the Calgary Stampede in 1912, he feared the west was dying. Weadick hoped to portray the west as it truly was, to create learning opportunities for youth and to connect Calgary’s increasingly urban environment to its rural roots.

The Agrium Western Event Centre is set to open before the 10-day Stampede in 2014, is a 150,000 square foot (13,935 square metres) space that will showcase agriculture and serve as a competition venue. The welcome rotunda will offer inquiry-based educational experiences for Calgary middle school students. In the fall of 2014, schools will participate in a program called Journey 2050. This unique educational program explores the challenge of sustainably feeding the world in 2050. It empowers students to make decisions and adjust them based on their impact on society, the environment and the economy on a local and global scale.

Next on the docket is Riverfront Park, a 12.2 acre park along the Elbow River which will open in 2016 (to give you perspective, Prince’s Island Park is four acres). Riverfront Park will be the new home of Indian Village and will feature five new public art projects that relate to the history of Calgary, Treaty 7 or the Calgary Stampede. The park will be open year-round to Calgarians and visitors, as well as to other festivals.

And last, but certainly not least, is the brand new Youth Campus. With indoor and outdoor learning spaces, young people will have the chance to learn about the creative arts in an inspiring, inclusive environment. Youth Campus will also be home to the Calgary Arts Academy, a public charter school who will be partnered with the Stampede in numerous different educational programs.

“It is fitting that as the Stampede enters our second century we are able to deliver excitement and relevance to our community in an authentic way that still reflects our commitment to western heritage and values,” says Warren Connell, park development vice-president.

Did you know? Some interesting facts about Stampede Park: