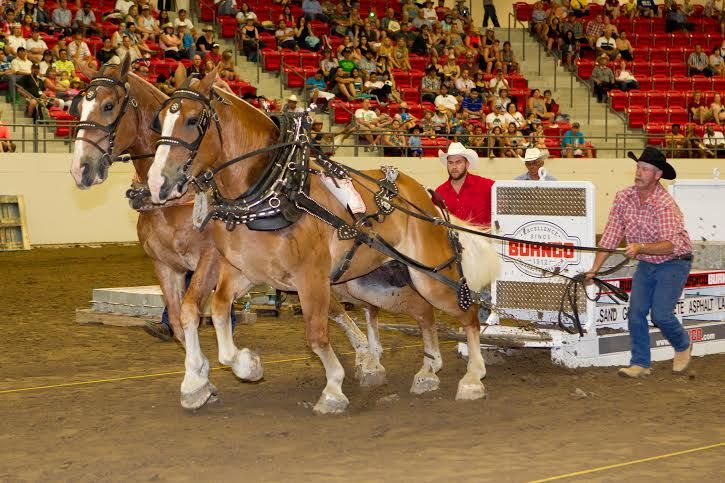 Calgary – The last three evenings of the 2015 Calgary Stampede will see some of the most popular horse-sport events – the Heavy Horse Pulls. After competitions featuring the agility, courage and intelligence of the light horse breeds, the Heavy Horse Pulls show off the power, determination and discipline of their bigger cousins. On Thursday, July 9th, in the Agriculture Building Pavilion at 6pm, Heavy Horse Pull fans will get a chance to participate in the show by becoming a sponsor of one of the teams in the Heavy Horse Pull Team Auction.

Again this year, the heavy horses will compete in the Agrium Western Event Centre. The first class to pull is the Lightweights – teams weighing between 2,400 and 3,200 pounds - on Friday, July 10th. The Middleweights, weighing 3,201 to 3,500 pounds, go on Saturday, July 11th, also at 7. Sunday, July 12th, sees the Heavyweights, who weigh 3,501 pounds and up, take the field.

A new entry in the Lightweight class will be coming from Banff. The two Belgian geldings, John and Wayne, who compose the team weren’t pulling horses a year ago. When James Gaudry persuaded Julie Canning of Banff Trail Riders to buy them at an auction in the fall of 2014, the only other bidders were meat buyers.

“You couldn’t even get close to them,” Canning remembers. Despite her reluctance, Gaudry claimed saw a potential pulling team in the skittish pair. “Believe in me. I can do this,” Canning remembers Gaudry telling her. “We barely got them in the trailer!” she laughs.

Over the winter, Canning continues, Gaudry, Ryan Rankine and Tyler Ritchie, as well as the company’s farriers – worked with the horses on their own time. Gradually and patiently they effected what Canning calls ‘a massive, beautiful transformation’. The horses once too skittish to even have their hooves trimmed recently appeared at the company’s Stampede breakfast and patiently allowed visitors to have pictures taken with them. The team’s hopes are high coming into their first Stampede Heavy Horse Pull.