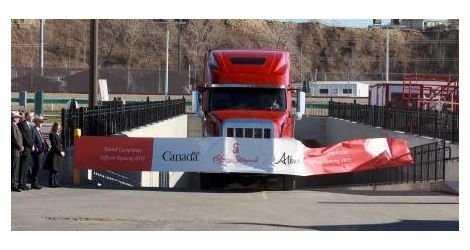 The new two-lane tunnel separates people from vehicles and livestock, reduces vehicle traffic on the track, brings all livestock safely to the infield, and supports two-way vehicle traffic. Ultimately, the new tunnel will provide exhibitors and competitors with better access to the Agrium Western Event Centre, which is being built on the south side of the Agriculture Building.

“Our Government is proud to continue to invest in the Calgary Stampede Park, a renowned destination that attracts tourists from across the country and around the world,” said MP Crockatt, of on behalf of the Honourable Denis Lebel, Minister of Infrastructure, Communities and Intergovernmental Affairs and Minister of the Economic Development Agency of Canada for the Regions of Quebec. “People, livestock, and equipment can now move more safely and efficiently to and from the arena infield thanks to these important new additions. This tunnel played a vital role in organizers’ ability to successfully hold last summer’s Stampede during such challenging circumstances.”

“Part of building Alberta is building strong connections between Albertans,” said Minister Olson. “The Calgary Stampede brings a little bit of the country to the city, and while it’s great fun, it is also a great opportunity for Albertans to connect with their rural roots and gain a greater appreciation for our province’s agriculture industry. With this new expansion, the Stampede will be helping to make the bonds between rural and urban Alberta even stronger.”

The Stampede showcases Alberta’s agriculture expertise to the world, with thousands of visitors from more than 60 countries coming to the Stampede every year to learn about agriculture. The completion of new two-lane tunnel and a reconfigured racetrack at the iconic Stampede Park is an essential part of the Stampede vision of a year-round gathering place for agriculture, commerce, education and entertainment.

"The Agriculture Discovery Zone will provide guests with hands-on educational programming and experiences,” said CEO Kimball. “The new infield tunnel is a strategic part of making it all come together by creating much needed additional public space to showcase agriculture in an interactive and exciting environment.”

The Government of Canada is contributing up to $25 million towards the revitalization of Stampede Park from the Major Infrastructure Component of the Building Canada Fund. Of the federal commitment, approximately $3.4 million was allocated to the construction of the new tunnel and reconfigured track. The Government of Alberta has also provided $25 million to the Calgary Stampede agricultural expansion project, which includes the new Agrium Western Event Centre, while the Calgary Stampede will be responsible for all remaining costs. The total eligible project costs are estimated at $55.3 million.

Canada’s Economic Action Plan 2013 is delivering $70 billion for public infrastructure, including a $53 billion New Building Canada Plan to build roads, bridges, subways, commuter rail, and other public infrastructure in cooperation with provinces, territories, and municipalities. Thanks to the Government of Canada's leadership and strong economic and financial fundamentals, the Canadian economy has recovered from the global recession better than most other industrialized countries. Canada's economy has created over 1 million net new jobs since July 2009. The New Building Canada Plan, combined with other federal infrastructure investments, will support Canada's infrastructure advantage, a key enabler of economic growth and job creation.

For additional information about federal investments in infrastructure visit www.infrastructure.gc.ca or follow us on Twitter at @INFC_eng.