CALGARY – In this sport, Lesh is more.

In recent years, the Lesh brothers out of Oklahoma have definitely left their mark on the Calgary Stampede Team Cattle Penning Competition, presented by Calfrac Well Services — and the same can be said for their impact on the sport of team penning across the continent. Joel, 28, Jordan, 21, and Jared, 31, are all household names in this exciting equestrian discipline, while Jamin, 30, holds his own at competitions in the Sooner State. 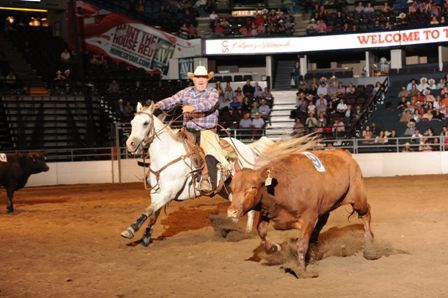 “That’s what we work at,” says Joel. “Jared and his wife (Sarah), they moved to Texas and they run a business finding horses for people to start penning on. At my indoor arena (the Lazy J Arena at Stillwater, Okla.), we just held our first event (in May) where we ran 1,400 teams in three days — the second-largest show in North America this year, with 200 people from 25 U.S. states and Canada, and $45,000 in cash and prizes.

“I want to make penning bigger. I put on clinics to teach more people, and I like seeing the horses I train, and the people I’ve showed how to do it, succeed. If you’re growing the sport, it’s more fun for you.”

The Stampede’s Team Cattle Penning Competition, presented by Calfrac Well Services, is one of the sport’s undisputed annual marquee events. This year’s edition, during the Stampede’s Centennial celebrations, has attracted a whopping 777 teams from across the continent — with an estimated total prize purse of $400,000 and a dozen Centennial Trophy Saddles up for grabs.

The competition will begin with two days’ worth of preliminaries at the Okotoks Agricultural Society, at Okotoks, Alta., on Wednesday, July 4 and Thursday, July 5. And from the hundreds of teams who’ve thrown their hats in the ring — 72 in the Open Class, 135 in the 14 Class, 297 in the 10 Class, and 273 in the 7 Class — only the sport’s elite practitioners will survive for a couple of thrilling rides under the lights of the Scotiabank Saddledome. For four straight nights, starting at 5:30 p.m., the Team Cattle Penning Competition will take over the Saddledome — the 14 Class on Friday, July 6; the 10 Class on Saturday, July 7; the Open Class on Sunday, July 8; and the 7 Class on Monday, July 9 — with the best 20 teams competing in the third round, and the 10-team final immediately to follow.

Team Cattle Penning, a race against the clock, gives a team of three riders on horseback 60 seconds to separate three specifically identified cattle from a herd of 30 and direct them into a 16-foot-by-24-foot pen at the opposite end of the arena. Teamwork is key, with all three riders working in harmony to cut out the correct cattle and drive them to the pen. Teams of riders enter the Stampede’s four classes based on relative skill and experience — in ascending order from 7 Class to 10 Class to 14 Class to the professionals of the Open Class.

Joel and Jordan have been making the annual trek to Calgary since 2006, and have been duly rewarded at The Greatest Outdoor Show on Earth.

Joel has been part of the Stampede’s Open Class championship trio in two of the past three years, while Jordan was part of last year’s Open title with his big brother and won a 10 Class crown in 2009.

Elsewhere, Joel, Jared, and Sarah teamed up for an open team penning victory at the 2010 American Quarter Horse Association (AQHA) World Show in Oklahoma City. Joel and Jordan posted the best average time at this year’s National Western Stock Show at Denver in January, while Jordan and Sarah paired up for an AQHA global open title in ranch sorting, a sport similar to team penning, last November.

Joel has also captured four United States Team Penning Association (USTPA) titles — validation for the estimated 160,000 kilometres he and Jordan put on the odometer together each year to saddle up in 45 to 50 competitions across North America.

“It’s the excitement, the adrenalin rush. Team penning is a fast-paced sport — you’re moving, you’re thinking on the go,” he says. “There’s a competitive edge that a lot of sports don’t always keep up with. It’s a timed event, not judged, so you have to make up for your mistakes, and fix them, within the time limit, or you get a no-time hung on you.”

And while the Stampede’s prize payout is hard to ignore, there’s another reason the Lesh brothers make the annual trek all the way up to southern Alberta. “I come up and stay the whole two weeks of Stampede for a vacation,” says Joel. “The second weekend of Stampede? That’s my one weekend a year where I take a vacation.”

So, do the brothers Lesh take a day trip to the Rocky Mountains? Some trout fishing in the Bow River? “No. We watch the rodeo every day,” replies Joel with a chuckle.