CALGARY – You might just say John Nostadt “steered” his way to victory.

Nostadt, who farms in Maidstone, Ont., near Windsor, had a feeling about his 1,324-pound crossbred steer this spring – enough of a feeling that he decided to make the cross-continent trek to Calgary for the first time in a decade. 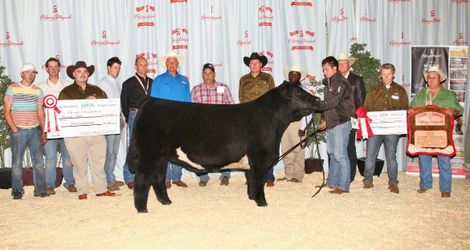 “We had truck trouble coming out. I put a motor in it just before we left home, and a hose blew off it . . . right in downtown Chicago,” recalled Nostadt on Saturday with a rueful chuckle. “I was almost going to turn around, but I thought I had a nice one, so I thought I’d better get it fixed.”

That Windy City mechanic may suddenly be on Nostadt’s Christmas card list. That crossbred steer – Angus, Simmental, and Maine Anjou – ended up earning Nostadt and his business partner, Martin Koyle, a cool $11,000 as the grand champion of the Calgary Stampede’s 30th annual UFA Steer Classic, held Saturday under the Big Top.

Nostadt and Koyle collect $10,000 from UFA for overall grand champion honours, as per the verdict of show judge Brandon Callis of Brenham, Texas, plus $1,000 for winning the Open class. As per a decade-long tradition, the grand champion steer has been purchased by the Penny Lane Entertainment Group – and is most likely destined to be the main course at Zen 8 Grill for a fall gala fundraiser.

Nostadt has enjoyed a real hot streak during his infrequent appearances at the Stampede. He also took top honours at the UFA Steer Classic in 2002 when he brought a Limousin out West, and another of his animals took a best-in-breed red ribbon during the first edition of the show back in 1983.

“I’m a little jittery, still, getting over the hype of winning in Centennial year. It’s a real privilege to come here, and do so well . . . it’s just an honour to show at the Calgary Stampede,” he said. “We haven’t shown him anywhere. This was a one-time deal. But we liked him . . . knew he was nice.”

Her day’s total earnings, however, ended up at $14,000, since victory in the Hereford class was worth $10,000 all on its own. The Canadian Hereford Association had put up the money in honour of the 16th World Hereford Conference, which has returned to Canada – and southern Alberta – for the first time since 1976. The steer has been purchased by the Canadian Association of Petroleum Landmen (CAPL), and will remain on display for the duration of the 2012 Stampede.

Townsend said she’s entered the steer – officially owned by Lone Star Angus and Butler Cattle Co. – at 12 shows this year and won all but two, with victories in Lloydminster, Vermilion, Olds, and Bashaw.

“I was sure hoping (for victory in the Hereford class). This feels awesome,” she said. “Everybody loves him and said he was a great steer – that he was the most complete, soundest walking, biggest boned, prettiest front-ended steer out there this year.”

The UFA Steer Classic continues to chart a steady growth in terms of participation – going from 79 entries in 2010, to 98 to last summer, to 129 this time around, with exhibitors arriving from across British Columbia, Alberta, Saskatchewan, Manitoba, Ontario, and even Iowa. The culmination of the regional steer show season, and the richest steer show in Canada, the UFA Steer Classic sees members of the beef industry congregate at the Stampede to promote and compete in everything from the merits of purebred genetics to the current trends in consumer beef demands.

“This is a friendly, yet aggressive competition. There’s straightbred cattle being shown, as well as crossbred cattle. The steers that compete at the UFA Steer Classic have been competing against each other at shows all year. The excitement has been building all season,” notes Don Miller, who chairs the Stampede’s Steer Classic committee. “This event attracts breeders and cattle people from all over. It’s got a tremendous following among both purebred and commercial cattle breeders who want to see how things turn out.”

Just as importantly, the UFA Steer Classic represents a tremendous opportunity for the cattle industry to educate the urban public about its safe food production standards and responsiveness to consumer market trends. “It’s important to let urbanites know that the quality of Canadian beef is world-class,” says Miller.

Event organizers continue to emphasize youth involvement, with the second annual Junior Steer Champion Auction held immediately following the UFA Steer Classic on Saturday afternoon. The owner of the grand champion in the Junior Class, Chase Miller of Cremona, Alta., received a $3,000 post-secondary scholarship, as well as $2,000 cash, while the owner of the reserve champion, Kathryn Dolliver of Stettler, Alta., earned a scholarship in the amount of $2,000, plus $1,500 cash. Both animals immediately went under the gavel, with proceeds going toward the growth of a self-sustaining Stampede scholarship fund.

For the second year, the UFA Steer Classic also features a Jackpot Heifer Show, which will be held Sunday, July 15 at 11 a.m. in the Northern Lights Arena.

It’s expected that 75 animals from the UFA Steer Classic will be entered in the Stampede’s Quality Beef Competition on Monday, July 16, at Cargill Foods in High River, Alta.